The Spanish 8 Reales coin has a prominent place in American history. Its great grandfather, the Pillar Dollar, was always listed in U.S. coin books as one of the principal coins of the American colonies as it circulated throughout the colonies and was used by the Founding Fathers. There was even debate among the Founding Fathers whether to adopt the Spanish Milled Dollar as our unit of currency (Jefferson’s 1776 proposal) or to use a decimal value. By 1791, Franklin, Hamilton and now even Jefferson suggested the new United States create its own decimal coinage.

Spanish coinage was dominant in the Americas – North, Central and South – as well as being popular throughout Europe and Asia. It was truly a world currency.  But it first became influential with the discovery of Silver in Mexico, Peru and Bolivia during the 16th century. Spain’s mighty armada ruled the seas and this further encouraged the use of Spanish coinage. Spanish Milled Dollars were divided into eighths, each worth approximately $0.125. The Silver reales coins were struck in 1/2, 1, 2, 4 and 8 reales. 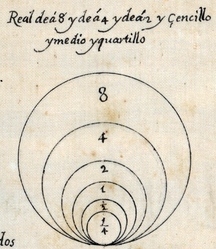 But during the early 1800s, Spain’s influence waned in America, but not in Central or South America. The loss of colonies in the newly formed United States led to the use of American coins. But Spanish Milled Dollars and their counterparts circulated freely until 1857.

In 1788, Charles III died and his son, Charles IV, succeeded him to the throne. Unlike his father, Charles IV was a passive monarch. He left the running of the government to his Prime Minister and to his own wife, Maria Luisa. He was more interested in hunting and personal pursuits.  European affairs interrupted his personal pleasures.

In 1793, during the French Revolution, Spain formally protested the execution of the former King of France, Louis XVI, and subsequently declared war on France. 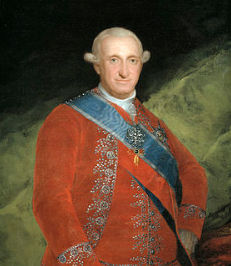 After the declaration of war, Portugal and Spain signed a treaty of alliance against France. The intrigue didn’t end there. In 1796 France forced an alliance with Spain and jointly declared war on Great Britain. Spain remained an ally of France until the British victory at Trafalgar, when Spain became allied with Britain.

However, after Napoleon’s victory over Prussia in 1807, Spain came back to the French side. This continual switching of alliances greatly devalued Charles’ position as a trustworthy ally and lowered his standing on the world stage. Anxious to take over from his father, Crown Prince Ferdinand attempted to overthrow the Charles IV in an aborted coup in 1807.

The Spanish 8 reales coins remained prominent on the world stage, especially in New Spain (the New World). But there were problems in supplying new coinage dies to mints in Mexico City, Lima and Potosi, so these mints were authorized to use the dies with the portrait of Charles III while simply changing the name to Charles IIII by adding another Roman numeral I. New dies did not arrive until 1791, when the portrait was replaced as well as name. 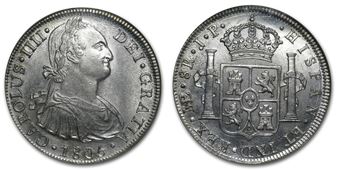 The Spanish 8 reales coins survived long after the death of the Spanish royalty and were accepted as a strong world currency. Much like the U.S. Trade Dollar coins, which were intended for use in Asia, the Spanish 8 reales also circulated throughout Asia, especially in China. The example below is one that traded hands between Asian merchants and bears the distinctive “chop marks” to prove merchants accepted and trusted the Silver content and value of these coins. 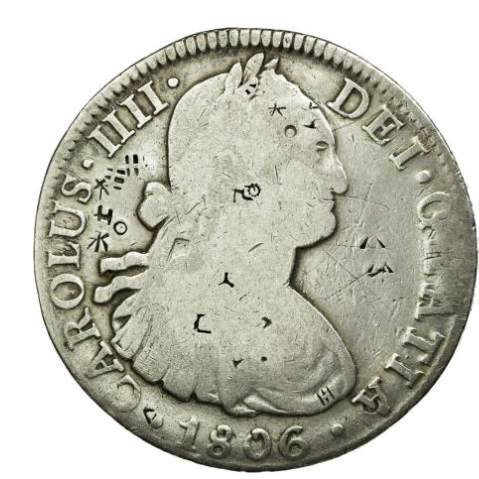 Spanish Reales coins were at America’s founding and continued to be a powerful influence until the Spanish-American War ended 1898 when Spain lost numerous possessions and the 8 reales coin lost its economic influence.