Sixteenth-century France was a place of great change. Prior to that time, many tribes made up most European countries and France was no exception. There was no unified language to bind the tribes together or any central government in which to show pride. The coinage was crude and lacking in importance. But in France, a young new king changed all of that.

At age 21, Francis was the son of Charles, Count of Angoulême, and Louise of Savoy. As France was slightly more enlightened than its neighbors, Francis heavily promoted art, literature and sophistication. He was the catalyst for the French Renaissance years before it became popular.

Frenchmen everywhere began looking beyond their own borders with the help and encouragement of Francis I. For example, Jacques Cartier was one of dozens of French explorers hurriedly investigating the New World and claiming what he could. His exploration of the St. Lawrence River allowed him to claim Canada for France. Likewise, Samuel de Champlain also claimed parts of Canada for France and explored the territory thoroughly. The French began referring to Canada as “New France” and de Champlain became known as the Father of New France.

There was one area of 16th century France where Francis I helped elevated his country above others. Francis was a great patron of the arts and sculptors, painters and artisans of all types came to France to be at the height of their culture. Likely, the most famous artist to head to France was Italy’s Leonardo da Vinci.

Da Vinci was a well-respected artist, having already created such works as The Baptism of Christ, The Adoration of the Magi, the Madonna and The Last Supper for various elements of the Holy Catholic Church in Rome. He was a Renaissance man in his own right – painter, sculptor, musician, engineer, mathematician, historian and architect.

But Italy was a mass of warring factions and civil unrest plagued the nation. Francis I enticed da Vinci to come to France where his artistry would be much appreciated. He brought with him his most enduring work – the Mona Lisa, which Francis I purchased. Leonardo died in 1519, at age 67, while in the service of the French King.

King Francis I improved the lives of French citizens and expanded France’s reach well beyond its borders. He was truly a driving force in his world. As a Christian king, living a fairly short time after the Crusades, he was sophisticated enough to forge an alliance with Muslim Sultan Suleiman the Magnificent, unthinkable for a Christian at that time.

Even the coinage of France grew and prospered under Francis I. He encouraged its dominance as one of the first “world Gold coinages” as he sought the French Ecu to supplant the British Gold Guinea and the Spanish Maravedis. France now had power, land, world territory, art and a worldwide reputation under Francis I. It would also have a great Gold coinage as well. 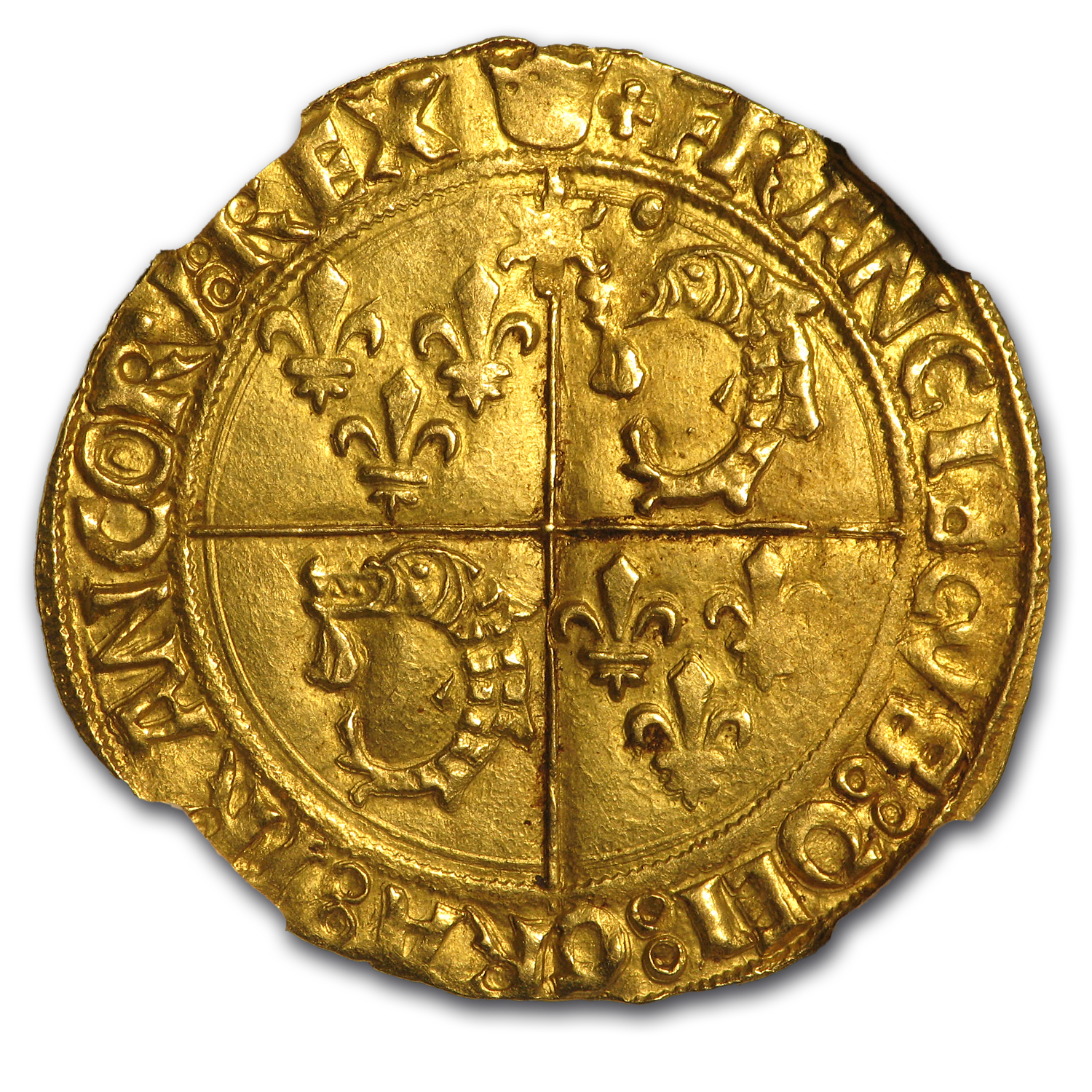 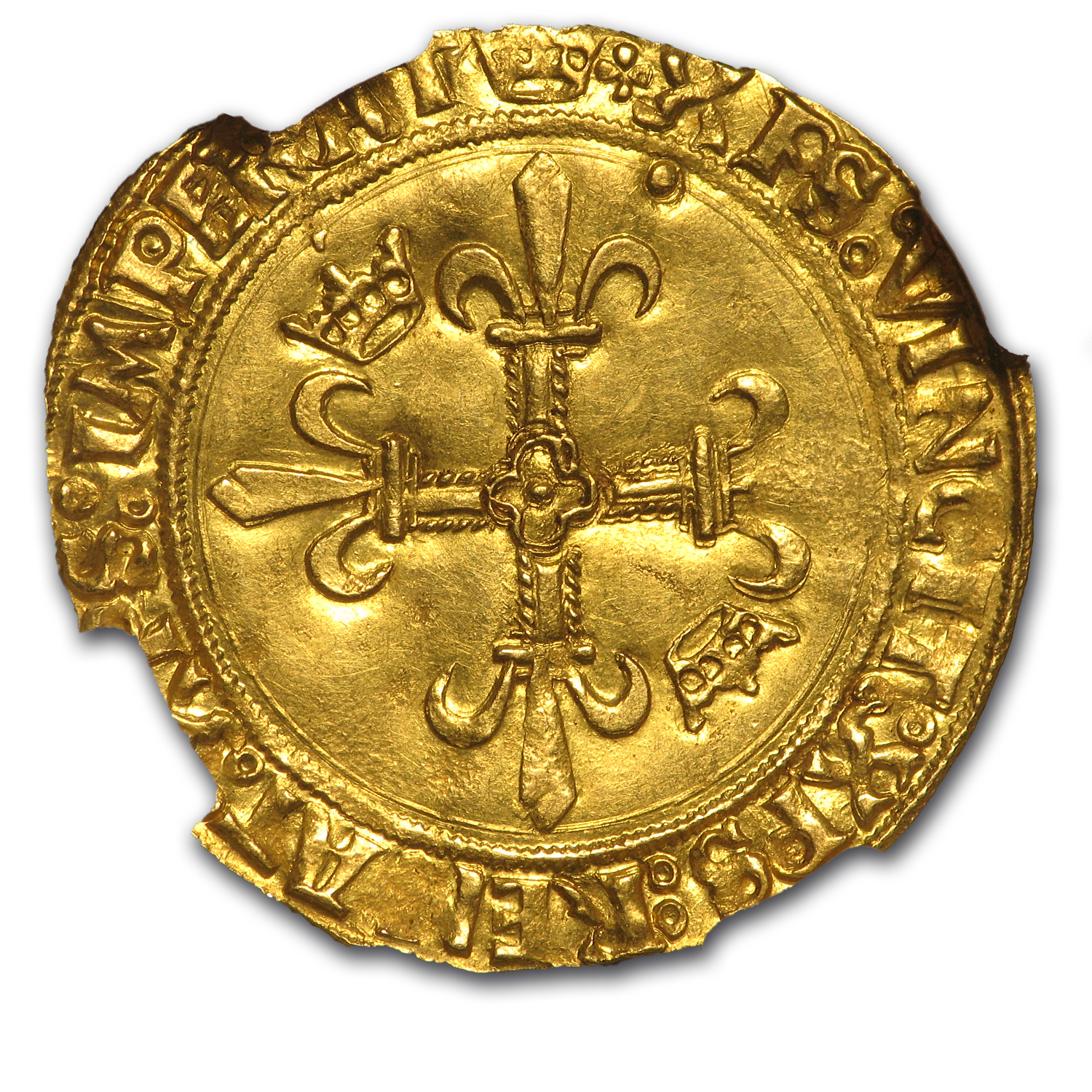 British Gold Guineas, Gold Nobles and Gold Angels were popular in both the Old World and the New World. But the Gold coinage of France was becoming a new standard for other European countries to aspire to.

The consistent design depicts a shield upon which there are three fleurs-de-lis. The reverse has a cross (attesting to Christianity) adorned with fleur-de-lis on each end. This coin was struck when the power, popularity and might of the French kingdom was at its apex.

Francis I is a relatively unknown figure in history but those who know the influence he had greatly admire him. These early French coins did not survive in high numbers and are extremely treasured here and in Europe.

Along with the beautiful coinage he inspired, this visionary young king was also responsible for the Mona Lisa being housed in the Louvre and not in the prominent Uffizi Gallery of Florence.