The year was 1901 and the United States had just entered the 20th century. The average American male’s annual salary was $450. There were 45 states in the Union and President William McKinley would not survive the year because of an assassin’s bullet.

The United States had issued large size paper money since 1861 and 40 years later one of the most beautiful notes ever designed was being printed at the Treasury Department by the Bureau of Engraving and Printing (BEP).

One of the types of currency printed by the BEP was Legal Tender notes. These notes, first printed in 1861, were notes not backed by Gold or Silver, but by the “full faith and credit of the United States government.” The government demanded that these notes be accepted as payment for all debts, public or private. By the turn of the 20th century, BEP engravers had raised their engraving skills to an art form.

It had been very popular to place the images of important, but deceased, American heroes on our currency. In 1904 we were going to celebrate the travels of two very famous American explorers – Captain Meriwether Lewis and Lieutenant William Clark. Debate raged in the BEP whether to issue a note with only their images on it or whether other symbolism should be included. 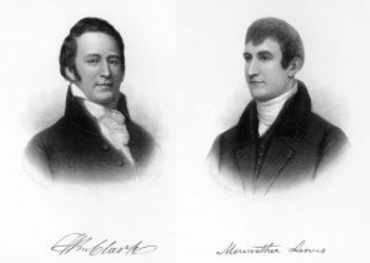 Lewis and Clark explored the lands from St. Louis west to the Pacific Ocean and back. They opened up “the West” and traveled through unexplored territory where previously only Native Americans had dared to tread. This “Corps of Discovery” was very important but the symbolism of opening the American West was the key fact.

To that end, engravers at the BEP decided to take a universally recognized symbol of the American West and let it play the dominant image on the 1901 Legal Tender note. It was agreed that an American bison would be the central vignette.

The engravers needed images of American bison for their preliminary models, but being in Washington, D.C., there were no wild buffalo nearby to study.  There was, however, a stuffed American bison on full display at the Smithsonian Institution. That animal had been killed in the Montana Territory in 1886 and taxidermists restored its life-like majesty. Once the specimen was discovered, it was determined that it would make a handsome exhibit in our National Collection.

The engravers used the American bison as the main theme, but they placed oval portraits of Lewis and Clark to each side of the bison. For the back of the note, they chose an allegorical representation of “Columbia.” Columbia usually is displayed wearing an American flag gown or a Roman-style toga and a Phrygian cap. The Phrygian cap is a soft cap, usually red in color, often adorning the top of a pole, and it symbolizes freedom and the pursuit of liberty. 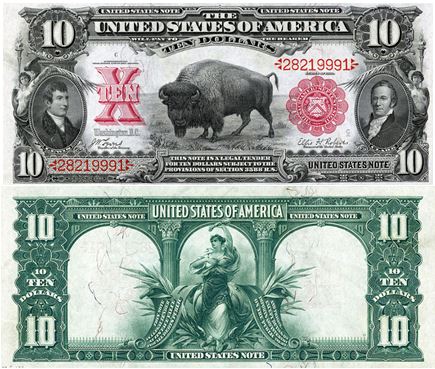 One of the popular misconceptions about this note is that the buffalo is actually Black Diamond, the bison featured on James Earle Fraser’s 1913 Buffalo Nickel. However, Fraser’s animal was very much alive and living in the Bronx Zoo in 1913.

The engravers at the BEP did a spectacular job of creating an image of the “Giant of the Plains” as American bison were known. The same bison image was duplicated on a 30-cent postage stamp in 1923 and on a Military Payment Certificate used during the Vietnam War era.

This $10 note, while representing more than one-week’s pay for the average American, was very popular with the public due to the bison image, just as the Buffalo Nickel would be popular a dozen years later. The popularity stems from the truly iconic American images. The notes, all dated 1901, were still printed in the early 1920s due to the signature combinations used on the notes.

This iconic American note has earned a place in all large size currency collections.