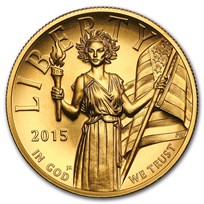 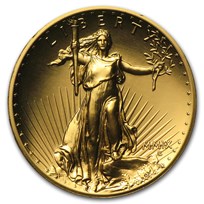 2009 Ultra High Relief Double Eagle BU (w/Box and COA)
This 1 oz .9999 Fine Gold coin is a triumph in coin design representing the culmination - more than a century in the making - of a partnership between reno...
Learn More
Log In For Alerts

Liberty has appeared on U.S. circulating coins for over 150 years, from 1793 to 1947. Throughout the decades, Liberty’s appearance has changed to signify a changing America. In 2015, the U.S. Mint produced a Gold coin with a modernized version of Liberty. New versions followed in the years to come. APMEX carries a wide selection of High Relief American Liberty Gold coins, including certified options.

The 2015 American Liberty High Relief Gold coin is made with .9999 fine Gold, with a mintage limit of 50,000 and a nominal denomination of $100. These coins were minted at West Point. The design is a modern depiction of Liberty. The reverse design features a bald eagle in flight, clutching an olive branch in its talons.

2017 marked the 225th anniversary of the United States Mint. To mark this momentous occasion, they introduced the 2017 American Liberty 225th Anniversary Gold coin featuring a modern rendition of Lady Liberty. The American Liberty 225th Anniversary Gold coin was struck in .9999 fine Gold and was the first high relief coin with a Proof finish ever minted by the United States. These coins were minted at West Point and depicted a profile of Liberty wearing a crown of stars.

This coin was created as a complement to the 1/10 oz Gold coin issued in 2017 to commemorate the United States Mint’s 225th anniversary. Struck in .9999 fine Gold, it features the same modern design featured on the 2017 coin. These coins were minted at West Point and have a denomination of $10.

The 2019 American Liberty High Relief Gold coins showcases a different rendition of Liberty than the 2015, 2017 or 2018. The obverse features Liberty with 13 rays of light emanating along her headdress, while the reverse showcases a bald eagle as it prepares to land. Minted at West Point, these coins were struck in .9999 fine Gold.

2020 marked the 75th anniversary of the end of the United States’ involvement in World War II. This .9999 fine Gold coin includes an obverse design featuring an eagle in flight grasping an olive branch, symbolizing peace, in its right talon. The design is inspired by the 1945 version of the Great Seal of the United States, where the eagle faces to the right, toward the olive branch. The reverse design echoes the sun element on the obverse of the 1945 Victory Medal. Minted at West Point, this coin has a denomination of $25.

The 2009 Ultra High Relief Gold Eagle is a living resemblance of the original Gold Double Eagle design by Augustus Saint-Gaudens. The High Relief is achieved by using a thicker coin and a smaller diameter allowing for the field (background) to be concave, giving more space for a raised design. Although the dimensions are different than the standard 1 oz coin, this Ultra High Relief version still contains one full ounce of U.S. Mint Gold. This coin is a digitally reproduced version of Saint-Gaudens' original, never-circulated, Ultra High Relief 1907 Double Eagle Gold piece.

In 1907, Augustus Saint-Gaudens designed what would become a wildly popular coin: the Gold Double Eagle. His design was so loved it was recreated in 1986 for the U.S. Mint's Gold Eagle bullion series. The beautiful High Relief Gold coin is a triumph of design representing the culmination of a partnership between renowned artist Augustus Saint-Gaudens and President Theodore Roosevelt.

If you need assistance in figuring out where to buy Gold coins, or if you should have any issue placing an order for Gold bullion on APMEX.com, we are eager to assist you. Our team of highly trained customer service associates can answer any questions on how to buy Gold, and can be reached by email or telephone, please call (800) 375-9006 or email service@APMEX.com. You can also sell Gold to APMEX by calling our Purchasing team at (800) 514-6318 to speak to one of our representatives or learn more about how to sell Gold to APMEX.

For 20 years, APMEX has provided customers with an easy shopping experience they can trust. We pride ourselves on transparency and consider every customer review to be valuable feedback. Please take a moment to read our reviews from valued customers on High Relief American Liberty Gold coins and more. We welcome and encourage feedback – each review allows us to improve your Precious Metals buying experience.

Why Buy Physical Gold and Silver from APMEX?

When you buy Precious Metals, you are investing in assets that transcend the volatile market. Bullion can play an essential role in a modern portfolio, as it hedges against the uncertainty investors typically find with other common investments, such as stocks and bonds. Gold and Silver can be a game changer for your investment strategy. Explore the benefits of buying Gold and Silver.