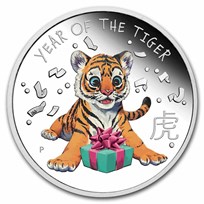 2022 Tuvalu 1/2 oz Silver Lunar Baby Tiger Proof (Colorized)
This adorable baby tiger coin celebrates the Year of the Tiger and is the perfect gift for any baby born in 2022.
Learn More
Log In For Alerts 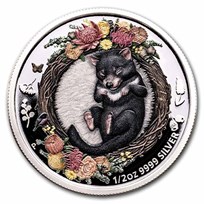 2021 Tuvalu 1/2 oz Silver Newborn Proof
Celebrate the arrival of a newborn baby with this gorgeous newborn coin which would make a beautiful gift or keepsake.
Learn More
Volume Discount Pricing

APMEX carries an extensive variety of Silver coins from The Perth Mint from series such as Classic Cars and Fire Engines of the World, to name just a few. Coins are available in sets or are sold individually.

In 2014, The Perth Mint introduced a new series showing the strong connection between a mother and her offspring. This multi-coin series will feature different mother and child pairs in the animal kingdom, all beautifully colorized in a Proof Silver finish to add further collectible appeal to the quality craftsmanship Perth Mint is known for. The Perth Mint's Mother's Love series gives you the opportunity to celebrate the tender side of many wild animals. From the powerful lion to the majestic brown bear, there is an excellent collectible product available for anyone.

This interesting series from The Perth Mint will feature unique mythical creatures. The first release in this series was the majestic griffin, with the head of an eagle and body of a lion. Later releases included a unicorn, phoenix, werewolf and dragon!

Land Down Under Series

In 2013, The Perth Mint introduced a new series showcasing a variety of Australian aspects: ancient culture, lifestyle, landmarks and discoveries. Each coin features a beautifully colorized image in a Proof Silver finish, adding further collectible appeal to the quality craftsmanship Perth Mint is known for. The Perth Mint's Land Down Under series gives you the opportunity to celebrate all of Australian culture and history in one beautiful collection. From surfing to the Great Barrier Reef and the Australian Gold Rush, there is an excellent collectible product available for anyone.

This interesting series from The Perth Mint features products showcasing animals of Australia - all on coins shaped like Australia! Not only are these Silver coins a unique shape, but they are colorized, adding even more beauty. The first release was the recognizable kookaburra, followed by the emu, kangaroo, platypus and koala.

In 2011, The Perth Mint began a five coin series highlighting endangered animals. Calling this series Wildlife in Need, the mint brought attention to species that are in danger of becoming extinct for various reasons. The first release in this Silver coin series was the well-known and lovable giant panda, followed by the orangutan, polar bear, black rhinoceros and siberian tiger. Each animal is shown in a beautiful full-color design, adding even more beauty to these beloved creatures.

In 2010, The Perth Mint released an exciting series celebrating the young offspring of some of Australia's most well-known animals. The series was so popular that, in 2012, the mint decided to release a second Bush Babies series! Some of the animals featured throughout the two series' have been the kangaroo, dingo, koala and platypus. Each animal is colorized for added beauty.

This interesting series from The Perth Mint showcases ships that only set sail in literary or musical history. The series includes Moby Dick's Pequod, the Jolly Roger and the Flying Dutchman. Each .999 fine Silver coin comes in a beautiful Proof finish, providing excellent detailing to the beloved designs.

Dive into the waters around Australia with this Australian Sea Life Series produced by The Perth Mint. This series of Silver coins allows you to take a journey to the depths of the sea and explore the colorful fish of the Great Barrier Reef. Through the Australian Sea Life Series, the Perth Mint introduces coin collectors all over the world to the incredible sea life inhabiting the underwater world.

In 2014, The Perth Mint introduced a new series celebrating Australian dinosaurs that roamed the earth during the Cretaceous Period more than 100 million years ago. Each coin features a beautifully colorized dinosaur in Proof Silver finish, adding further collectible appeal to the quality craftsmanship The Perth Mint is known for.

In 2013, The Perth Mint released a series of unique coins celebrating the lovely seasons of Australia. This four coin series features each season represented in beautiful color with an Australian animal as the focus. Additionally, each of these 1 oz Silver coins is a unique square shape, adding even more interest to the series.

This hugely popular series celebrates the extraordinary wildlife and natural wonders of Antarctica, as well as the legendary explorers who braved its harsh climate! Some releases in this series include the husky, leopard seal, and the south magnetic pole.

In 2016, The Perth Mint released an exciting series celebrating the offspring of some of the most recognizable wild cats in the world, including the tiger, white lion and leopard. Each release in this five-coin series depicts the playful animal cubs in exceptional colorized detail. All coins in the series have a limited mintage, combining collectible appeal with .999 fine Silver content.

From The Perth Mint comes an exciting new series featuring an adorable new Puppies series. Each coin is made from 1/2 oz of .999 fine Silver in Proof condition. The coins in this series feature a cute adorable puppy in full color. These playful puppies make a great gift collectors of any age.

The Perth Mint has released a variety of coins that help celebrate those important events in life. This includes coins showcasing popular occasions such as birthdays, weddings, graduation, the birth of a child and many more. Each commemorative coin features unique imagery and offers an exciting way to own quality .999 fine Silver to celebrate that special occasion in your life.

155K+ Customer Reviews
4.9/5 Overall Satisfaction Rating
Philip
Only place I buy precious metals and coins from .Very reputable and professional.
Roger
great service, pricing &amp;amp; selection
Janean
Awesome shopping experience!
Markus
Awesome products.
Norma
Always quick and easy to navigate the APMEX website.
Jeffrey
You guys have a great selection.
phillip
Apmex is awsome.
arthur
Easy to order, quick shipping, great experience.
Dean
Used the system to notify me when in stock and was able to order it right away.
scott
Been buying for years.... The eaziest and best I found to do business with. Professional.
Edith
Shopping experience has been fine, as usual
Andrew
Good service, great selection
Rand
APMEX is simply the finest in precious metals and supporting products!
Clint
Product is always as advertised and always arrives in a reasonable amount of time. Can&rsquo;t ask for much more than that.
Ronald
Each time I have been very pleased with not only the product but the speed in the delivery process. I'll be back again.
Guest
I love your Selection Always have what I&rsquo;m looking for I&rsquo;m buying Christmas gifts now so I will be back for more thank you and have a great holiday
Craig
Always an easy experience with APMEX.
Guest
Love apmex!!!
kin
Still to be seen, first order not arrived as yet but the process is simple and easy to follow.
Guest
Site is easy to use. Selection is fantastic. Prices competitive.
Thomas
Love this site and service
Scott
My shopping experience was great. I plan to buy more from APMEX in the future.
David
Always enjoy shopping APMEX, 5 star service.
Guest
Prices are very reasonable, order process and delivery methods are fast and easy
Peter
I have ordered many times and it was perfect
Robert
APMEX is great!
Josef
Apmex is fast and accurate thus far.
Angelo
I keep coming back because APMEX keeps the prices fair and that gives the buyer a chance to buy more.
Guest
I love this company. First class operation!
David
Been happy with all of my orders!
MARIA
Super easy and safe
MARIA
Easy, safe and fast delivery
Patricia
Always a great experience shopping here
Guest
Excellent, easy to purchase and great delivery.
Jean
Perfect!
James
Easy order process will advise further after receipt.
Graydon
I have been dealing with you for the last 3 years and I always return again for your great prices and service! Thank you.
Brian
very satisfied
Wilson
great as always. thanks
Bradley
Love your cyber Monday deals!
Andrew
APMEX always provides an easy shopping experience, and great selection of precious metal products!
Clifford
orders have all been easy and safe.
Stephen
Nice items and price
G
Easy ordering and prompt shipping
john
I think this is my 13th order or maybe 14th. I like buying from AMPEX. They are very reliable and it's easy to shop and purchase. I never had an issue.
Dwana
Order as expected
Lori
easy process good prices
Greg
APMEX makes it very easy to order online.
John
Love the cyber Monday Sale!!
Jean
Love APMEX. Great deals, easy payment and timely shipments. Always secure.
Check out what other customers are saying.
View More Reviews