Silver Lunar Year of the Rooster 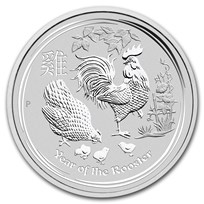 2017 Australia 2 oz Silver Lunar Rooster BU
The 2017 release of The Perth Mint's Lunar Series shows off even greater detail in this 2 oz size. 2017 marks the first year of the Silver Lunar coins mint...
Learn More
Log In For Alerts 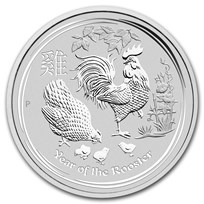 2017 Australia 1 kilo Silver Lunar Rooster BU
These magnificent Silver coins celebrate the Year of the Rooster, the tenth animal in the 12-year cycle of the Chinese zodiac. Each of these coins combines...
Learn More
Log In For Alerts

The Chinese Lunar Calendar is one of the most popular themes for coins, bars and rounds, with items produced by countries around the world. To celebrate 2017 as the Year of the Rooster, mints including The Perth Mint, the Royal Canadian Mint, British Royal Mint and the New Zealand Mint produced a variety of Silver coins, bars and rounds featuring the rooster. These Silver products are a perfect gift for anyone born in a rooster year: 1921, 1933, 1945, 1957, 1969, 1981, 1993, 2005 and 2017.

155K+ Customer Reviews
4.9/5 Overall Satisfaction Rating
Joseph
Great deals!! Thank You APMEX!!
christopher
Never a problem with APMEX Returning customer.
Kenneth
Great product and service and quick delivery !
Kevin
Simple, transparent, and easy
BillRiggle
Easy to navigate and shop. Great prices
Dale
Simply the Best!
Geoffrey
APMEX continues to provide quality secure service which I have appreciated for the past 4 years.
Larry
excellent - user friendly
will
Amazing Experience! Thank you for this site!
Blanks
Excellent service. Excellent selections. Excellent shipping. Quality customer service. Keep up the good work.
David
I've used APMEX before to buy and sell. Great service and pricing.
JOSELITO
Exceptionally satisfied doing business with APMEX!
Hector
Excellent products
Tu
Trusted Company . Great Service
James
Navigating APMEX site was very easy and simple even for someone who has never bought precious metals....ever.
wayne
found coin I wanted with no hassle
Julie
Great past experiences
Wendell
Easy on line shopping and it is easy to get help when you call. Customer service people are very patient.
raymond
i have always been pleased with your service
khaliq
Great Service!
Ryan
Nice and easy shopping and check out, waiting to see delivery and packaging
Michael
Very smooth checkout experience!
Paul
I enjoy the variety of metals to choose from.
Ralph
I have always been pleased with the quality of products.
Linda
I love APMEX. The website is very user friendly and the shipping is fast!
Ronda
I have made several purchases through APMEX. They make it easy for small collectors to purchase. Their packaging and delivery has been very good, as well.
Guest
Great customer service, great product compared to other companies!
Graham
As always, the experience has been enjoyable and easy. Thank you!
Scott
Always a pleasure doing business with APMEX.
Rebecca
AMPEX has been efficient and timely on all my orders. Customer service is outstanding.
Kevin
cool product and easy ordering. thanks apmex, great job.
Guest
fast and easy
Mark
Safe and secure check out
Guest
Very fast and efficient, will return for more purchases!
Christa
Always a great experience.
Dale
You can not go wrong ordering from APMEX
Jaime
I love this site.
Rick
Great website! Thanks!
Brenda
Great company - one that I trust!
Spencer
Very easy to buy and invest
MELODIE
Easy to order, great service.
Guest
so far, so good.
Robert
Great, appreciate your service!
sreenath
the purchase experience is quick and easy. thanks
RODERICK
I have been an APMEX customer for some time now. enjoy the experience which is very user friendly
James
Always a smooth transaction with APMEX.com
Steven
Good variety. Good prices for high-grade product (and I shop around) ))
Guest
Fast!
Peggy
I have ordered from APMEX several times and have always been pleased with the condition of the silver, the protective packaging that the orders are shipped in, ...
Barry
very professional
Check out what other customers are saying.
View More Reviews