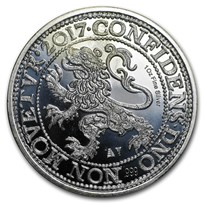 The Royal Dutch Mint is a company owned entirely by the Dutch State, and since 1807 the only Dutch entity that is allowed to strike and issue coins. In 2017, the Royal Dutch Mint has released a modern lion daalder restrike based on the design originally issued in 1617.

On 17 September 1806, when The Netherlands were under the rule of King Louis Napoleon, he decided that the striking and distribution of coins should be by a single, national body. This was in contrast to the Middle Ages custom of large trading cities having their own mint and Silver coins, which resulted in several coins circulating within the country, and many levels of controlling bureaucracy. Originally it was the intention to found the mint in the capital city of Amsterdam but, since there was insufficient finance available, it was decided to locate the National Mint seat in Utrecht.

155K+ Customer Reviews
4.9/5 Overall Satisfaction Rating
William
The whole process was easy from searching the website to placing the order. The selection available was very large and it was easy to search for what I was look ...
DS
Fast with a site that's easy to navigate. Apmex always has a very diverse collection of products.
Beth
easy and secure transaction.
Kirk
Easy and always reliable
Roger
I'm always happy with APMEX, they care for their customers!
Susan
Very easy to use
Guest
Always a great experience. My junk silver is never junky! Those who attend to my orders are top-notch. Thank you for free shipping.
Richard
Always a pleasure
Rahvy
Just received a recent order and as always, very satisfied!
John
Great company, great product, no hassles.
Terry
I enjoy purchasing my precious metals Apmex, because of free shipping and highest quality products.
Gary
Great Website. Easy to shop.
D
Smooth and efficient.
Robert
Very easy to find what I am looking for and decide when to make a purchase.
Shane
APMEX is and always will be my go to precious metals exchange.
Annette
I have away received amazing precious Metals
robert
when buying raw coins Apmex total satisfaction almost 100%
Horst
Always a great selection of various hard to find bullion and bars at an affordable price.
Benjamin
So very pleased with your company professional fast shipping and secure. I may not be you best customer but you have earned my trust and gained a life long cust ...
Chris
Excellent service
Guest
it has always been smooth sailing with these folks. Buy with confidence.
Nicole
Third or fourth time ordering from APMEX. I haven't even bothered trying a competitor because the pricing, quality and shipping are all terrific.
Brian
Apmex has always been great when dealing with. Thank you so much for a very smooth buying experience everytime
Michael
thanks...AAA+++
Katherine
Love your site and prices!
Michael
APMEX IS AWESOME
WmPro
Respectfully, my review will be based on the quality of the items ordered. Thank you.
Dallas
quick and easy; great website
Christine
Thank you for making this so easy.
Rhonda
this is my second time ordering. quick and easy!
Scott
Website is so easy to navigate! Thank you!
Paul
A very accommodating method of placing orders.
Nathan
So far pretty happy with the service
Dan
Always a good experience and fast delivery. Thank you!
Jeff
Love shopping with APMEX. The web interface is user-friendly, and the products are shipped quickly and in immaculate condition. Really appreciate their profes ...
Dennis
Always fast and easy.
Raymon
great product great service
Ralph
Coins rec'd have been as advertised and problem free
Jeffry
Good Selections, Good Prices, Good Service. Thank You.
Steel
Easy to order, looking forward to receiving it.
June
Thank you quick and easy. Shipments always on time or before.
Kevin
Shopping at APMEX is a smooth process.
Tim
The best place to purchase precious metals.
Oday
I trust the site
Willie
Thanks for great experiences.
Bruce
Fair prices, fast shipping and great customer service.
tze-hao
Thank you so much Perfect
Robert
Great! APMEX has the most inventory of new items that I am looking for.
Ron
I have always had a good experience with apmex
mmRobert
Great service great selections
Check out what other customers are saying.
View More Reviews