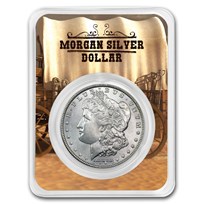 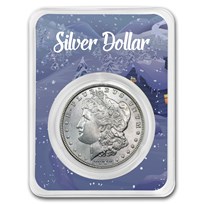 These Morgan and Peace Silver Dollars are presented in special tamper evident packaging. These APMEXclusive® specialty art cards take you back to the time when these Silver Dollars were a part of everyday currency.

These Morgan Dollar coins are a piece of American history, making it nostalgic as well as valuable. The Morgan Dollar holds a special place in U.S. coinage as it was the first coin to feature Lady Liberty with an American look, rather than the traditional Greek style. Her cap is adorned with wheat and cotton as a tribute to America's agricultural history.

The image of the eagle was also updated for the Morgan Dollar, showing a proportionally correct eagle with beautifully designed feathers. He carries an olive branch, showing America's desire for peace, and is perched atop a bundle of arrows, signifying America's readiness to defend her borders against attack. The Morgan Dollar flooded the markets from 1878-1904. Nearly two decades after production halted, the Morgan Dollar was seen again for one year only, in 1921, due to a renewed desire for this iconic, beautiful design.