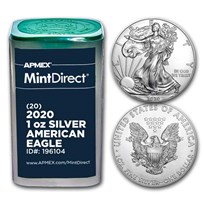 First released in 1986, American Silver Eagle coins are considered by many to be the most popular bullion program in the history of the United States. The Silver Eagle enjoys a special prestige as the only Silver bullion coin backed by the U.S. government. As a U.S. Mint Authorized Purchaser, APMEX is able to acquire 2020 Silver Eagles directly from the U.S. Mint and pass the popular Silver coins along to you. APMEX offers 2020 Silver Eagles at competitive Silver pricing.

The obverse of the 2020 Silver Eagle depicts a classic design created by Adolph A. Weinman. Used on the Walking Liberty Half Dollar coins from 1916 to 1947, the Walking Liberty image is one of the most cherished and well-known designs ever to grace American coinage. The reverse of the 2020 American Silver Eagle coin is just as impressive, featuring an American eagle, a symbol of American freedom and patriotism.