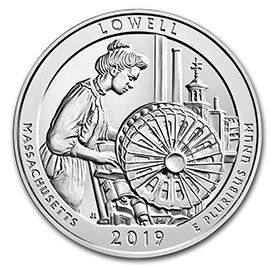 The America the Beautiful Silver quarters are the largest Silver bullion coins in U.S. Mint history. These large five ounce coins duplicate the designs of the America the Beautiful series of quarters, and though these are much more valuable they have the same face value. They are issued as collectibles and not intended for circulation.

The obverse of the Washington quarter is a bust of George Washington based on a sculpture by Jean-Antoine Houdon. It was created after Houdon took a life mask of Washington, then used that to create a marble sculpture that now sits in the Virginia State Capitol. Both Flanagan and Fraser’s designs created their Washington on Houdon’s template.

The reverse of the quarter was a heraldic eagle with its wings spread. This design lasted through 1998, when the state reverse designs were created. There was one break for 1975 to 1976 when the Bicentennial quarter was issued with a separate reverse commemorating the nation’s founding. In 1999, the 50 State Quarters Program created new reverses with five states each year getting a unique reverse. In 2009 the District of Columbia and U.S. territories got their own reverses, then in 2010 a new program called the America the Beautiful Quarters Program was authorized to run through 2021. These reverses honor areas of natural or historic significance in the U.S.

The oversize bullion coins are very similar to the circulation strikes but much larger, and they have the rotating America the Beautiful reverses that were used for the circulation strikes depending on the year they were released. They have their weight and purity inscribed on the edge. Each coin is made of 99.93% Silver with the rest being made of copper. Every coin comes from the Philadelphia Mint, though only burnished versions of the coin have the P mint mark.

This coin is notable mainly for its size, as it is the largest Silver coin in U.S. Mint history. Other than that, its major notability is because of its collectible value, not necessarily any historical significance.

Most of these have a small numismatic premium. There are few significant rarities or key dates in these. 2012 coins have significantly higher premiums, especially the Acadia and Hawai’I Volcanoes issues. Some graded coins in high condition may trade for higher prices as well.