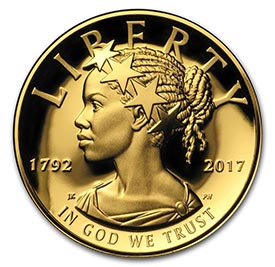 The American Liberty High Relief Gold Coin program was designed to provide interesting, unique and diverse designs of Lady Liberty for collectors who like Gold bullion coins. The U.S. Mint began to create different designs after the success of its Eagle coins, and one of these in recent years is the American Liberty.

The American Liberty coin program was only possible because private Gold ownership was reinstituted in the United States. Prior to this point, from the time of President Franklin Roosevelt’s Executive Order 6192 in 1933, private Gold ownership had been banned. There were some few exceptions — Gold coins with numismatic value were exempt, and industrial gold and jewelry was allowed. Up to five ounces of Gold bullion coins were allowed for each person. But such restrictions were severe and had the effect of drastically curtailing U.S. private gold holdings.

One of these was the American Liberty High Relief Gold Coin. This coin came about through discussions with the Citizens Coinage Advisory Committee. This committee laid out a plan to the Mint in 2014 that would have a modern view of Liberty.

These coins have a rotating obverse and reverse, with the reverse utilizing various different designs of an eagle and the obverse showing different designs of Liberty. The edge of the 2015 and 2019 coins was reeded, but the 2017 coin was lettered. Issues in 99.99% Gold are issued in odd years, while in even years medals are released with the same design in 99.99% Silver. These coins have a $100 face value and an ounce of Gold content.

These coins were the first $100 coins ever released by the U.S. Mint, and they depict some more diverse interpretations of Lady Liberty than many other coins in U.S. history. Collectors appreciate the unique designs.

These coins do not have a high premium over the spot price of their Gold, as they are modern issues with reasonably high mintage and demand has not outpaced supply.