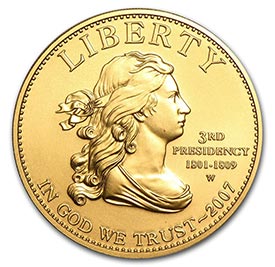 The U.S. Mint began to create different bullion coin designs after the success of its Eagle coins, and one of these in recent years is the First Spouse. This program began as an outgrowth of the Presidential $1 Coin program, but unlike the Presidential dollar it was never designed for circulation.

The First Spouses coin program was only possible because private Gold ownership was reinstituted in the United States. Prior to this point, from the time of President Franklin Roosevelt’s Executive Order 6192 in 1933, private Gold ownership had been banned. There were some few exceptions — Gold coins with numismatic value were exempt, and industrial gold and jewelry was allowed. Up to five ounces of Gold bullion coins were allowed for each person. But such restrictions were severe and had the effect of drastically curtailing U.S. private gold holdings.

These coins are designed to honor the U.S.’s First Ladies, and though there have not yet been any woman presidents any future husbands would be in this program as well. Each coin has an obverse of the First Lady and a reverse showcasing her life and work. In some cases a president was unmarried or widowed, and in that case the obverse is a version of Liberty from a coin at the time and the reverse is thematic to the president’s life. The only exception is widower Chester Arthur. The First Lady coin for his presidency depicts famous suffragette Alice Paul.

These coins contain a half ounce of Gold and have a $10 face value. They were issued on the same schedule as the Presidential dollar coins. There are also bronze medal duplicates available of the same obverse and reverse design available to the public.

The First Spouse coins are unique because of their ties to another coin program, but they have little historical significance in terms of the coins themselves.

Most First Spouse coins do not have a high premium. There are a few with higher premiums, usually those with lower mintages. These include the Jackson and Van Buren coins, the Anna Harrison coins, the Lucy Hayes proofs and the Eleanor Roosevelt burnished and proof coins. The burnished Eleanor Roosevelt is particularly sought after.