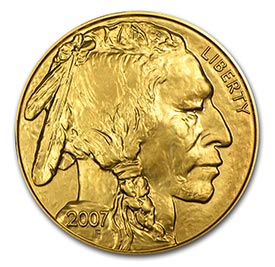 The Gold Buffalo coin program filled a void in U.S. bullion offerings and was designed to compete with high purity foreign coins. Some investors prefer pure Gold to the slightly lower-purity alloy of the American Eagle coin, and as those investors took advantage of coins like the Canadian Maple Leaf the U.S. Mint saw opportunity to reach this market.

The Gold Buffalo coin program was only possible because private Gold ownership was reinstituted in the United States. Prior to this point, from the time of President Franklin Roosevelt’s Executive Order 6192 in 1933, private Gold ownership had been banned. There were some few exceptions — Gold coins with numismatic value were exempt, and industrial gold and jewelry was allowed. Up to five ounces of Gold bullion coins were allowed for each person. But such restrictions were severe and had the effect of drastically curtailing U.S. private gold holdings.

President Gerald Ford lifted these restrictions on December 31, 1974, and soon after that point the U.S. Mint began exploring programs to offer Treasury-owned Precious Metals to the public. The first of these was the failed American Arts Gold medallion program, which ran from 1980 to 1984. In 1985 Congress passed a law allowing for the striking of Gold coins, followed rapidly by another act authorizing Silver. 1986 saw the first new Eagle bullion coins minted, with Gold and Silver to start.

The Eagle is the main bullion coin sold by the United States, but as the Mint continued to sell these coins they realized there was an opportunity they were missing out on: higher-purity Gold coins. The Canadian Maple Leaf, Australian Gold Nugget and Austrian Philharmonic were the major competitors on this point, as they were much higher in purity than the Eagle coin and its competitors and had been struck since the 1980s. Most other competing coins like the Krugerrand had similar purity to the Eagle.

The Gold Buffalo was created to compete directly with coins like the Maple, Nugget and Philharmonic. It is made from 99.99% fine Gold and has been struck since 2006. These coins have an obverse and reverse based on the famous Buffalo nickel design by James Earle Fraser. This obverse design depicts a Native American based on three separate chiefs that allowed Fraser to sketch them — Big Tree, Iron Tail and Two Moons. The reverse is an American bison. Fractional sizes were available in 2008, but this was the only year they were struck. Other than that year this has only been struck with the $50 face value and ounce size.

The Gold Buffalo is the first 99.99% pure Gold coin struck by the U.S. Mint in its history. These coins are not made for circulation as most older Gold coins were, so the lower durability of pure Gold is not as much of a factor.

Buffalo coins were created for their bullion value, not their numismatic value. As such most bullion strikes sell for a similar price. 2008 coins of all types have low mintages, and these command a premium above that of regular coins. The 2008-W and 2012-W proof also sell for a higher premium.