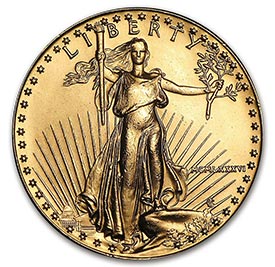 The Gold Eagle is a coin with a nominal face value of fifty dollars that is made of one troy ounce of 91.67% Gold, 3% Silver and 5.33% Copper, an alloy often called Crown Gold. There are bullion, proof and uncirculated versions available. This coin uses the famous Saint-Gaudens Liberty design with the sun behind her, used on the double eagle from 1097 to 1933. The reverse is a heraldic eagle designed by John Mercanti.

The Gold Bullion Coin Act authorized the minting of the Gold Eagle. According to these rules these coins are made from Gold mined in the United States and imprinted with Gold content and legal tender face value.

The American Eagle was a watershed point for bullion coins, and since the Gold and Silver Eagles were created there have been quite a few more issues of bullion — not just in the United States, but around the world.

Eagle coins were created for their bullion value, not the numismatic value, but there are some coins that have numismatic value. The 1/10 oz 1999-W bullion strike is a significant error. The 1/4 oz 2008-W burnished version is a key date as well, and the 2006-W, 2007-W and 2008-W burnished 1/2 oz coins have a higher premium as well. The 2006-W reverse proof also has a significantly higher premium than regular Gold Eagles.