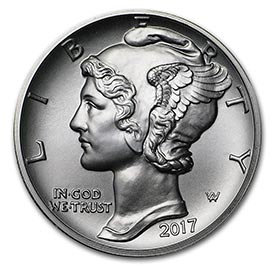 The Palladium Eagle was first struck in 2017, but it took a couple of years of work to get it to that point. Palladium Eagles are made from a 99.95% Palladium base. Mintages are small. Each coin has a $25 face value. These coins have Adolph Weinman’s famous design for the Mercury dime on the obverse, while the reverse is based on his medal design for the American Institute of Architects in 1907.

Bullion strikes are made available every year, but proofs are not. 2018 saw a proof strike made in West Point.

The American Eagle was a watershed point for bullion coins, and since the Gold and Silver Eagles were created there have been quite a few more issues of bullion — not just in the United States, but around the world. Palladium Eagles are the newest of the Eagle series, and the smallest mintage. These mintages are small because Palladium is one of the less-traded Precious Metals. It is uniquely valuable as an industrial metal as well as for its intrinsic value.

Palladium Eagles do not have a lot of numismatic value. These coins are very new, and though mintages are small demand is also small. As time goes on this may change.