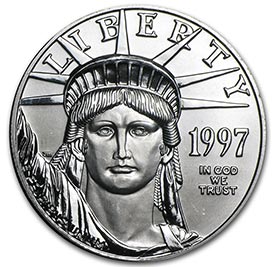 In some years (notably 2009 through 2013 and 2015) only proof strikes were available for the ounce coin. Platinum coins are not as popular as Gold or Silver, though they are still collected by investors. The Platinum Eagle has the unique selling point among bullion coins of regularly rotating designs, with series including “Life, Liberty and the Pursuit of Happiness”, “Vistas of Liberty”, “Foundations of Democracy” and more. These are also sold in multiple-coin sets.

The American Eagle was a watershed point for bullion coins, and since the Gold and Silver Eagles were created there have been quite a few more issues of bullion — not just in the United States, but around the world. Platinum Eagles were not the first bullion coin of that metal, but they sold well and have a good reputation.

Eagle coins were created for their bullion value, not the numismatic value, but there are some coins that have numismatic value. The 2007 prototype proof coin is very rare and expensive, too rare to be valued. The 2006, 2007 and 2008 burnished coins have significant premiums as well. Later coins also have a higher premium, especially post-2014.