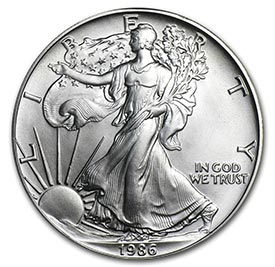 The American Eagle coin program came about after private Gold ownership was reinstituted in the United States. Starting in 1986 with the Gold and Silver Eagle, these coins have been a staple of U.S. Mint offerings ever since and a favorite among both coin collectors and investors.

The Silver Eagle is a coin with a nominal face value of one dollar that is made of one troy ounce of 99.9% Fine Silver. There are bullion, proof and uncirculated versions available. The obverse uses the famous Liberty Walking design by Adolph Weinman, used on the half dollar from 1916 to 1947. The reverse is a heraldic eagle designed by John Mercanti.

Plans for the Silver Eagle came about because the Defense National Stockpile had been growing to a point where there was no strategic need for that much Silver. Efforts to sell it impacted mining interests, and the government could not break the deadlock. Finally the Liberty Coin Act of June 21, 1985 authorized a bullion coin. The Silver originally came from the stockpile until 2002, when other sources were authorized.

The American Eagle was a watershed point for bullion coins, and since the Gold and Silver Eagles were created there have been quite a few more issues of bullion — not just in the United States, but around the world.