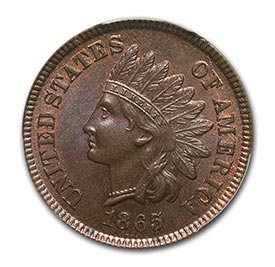 Old American cents were about the size of a half dollar, but the small cent that began with the Flying Eagle cent changed that. The Indian Head cent replaced the short-lived Flying Eagle Cent, becoming the first small cent design to run for any length of time.

The production difficulties caused by the Flying Eagle cent made the Indian Head penny a necessity. After the Civil War, this design became extremely popular, and with coin-operated machines becoming widespread, the cent saw unprecedented demand.

The Indian Head cent was a replacement for the Flying Eagle Cent. Though the Flying Eagle was considered one of the more beautiful coin designs that had been created for U.S. coinage, it was hard to strike well and many of the coins had weaknesses. As a result there were only two years of circulation strikes.

Mint director James Ross Snowden asked the Philadelphia Mint’s chief engraver James Barton Longacre to design a new cent to replace the Flying Eagle, and the Indian Head design was chosen due to its ease of striking. The low relief of the Indian head and laurel wreath on the back (later replaced by an oak wreath and shield) were far easier to work with than the previous design.

The head on the coin is the head of Liberty, but Longacre adds a Native American headdress to the traditional Liberty designs. Referencing older designs, he wrote a letter to the Mint director James Snowden explaining his rationale. “From the copper shores of Lake Superior to the Silver mountains of Potosi from the Ojibwa to the Aramanian, the feathered tiara is as characteristic of the primitive races of our hemisphere, as the turban is of the Asiatic,” stated Longacre. “Nor is there anything in its decorative character, repulsive to the association of Liberty … It is more appropriate than the Phrygian cap, the emblem rather of the emancipated slave than of the independent freeman, of those who are able to say ‘we were never in bondage to any man’. I regard then this emblem of America as a proper and well-defined portion of our national inheritance; and having now the opportunity of consecrating it as a memorial of Liberty, ‘our Liberty’, American Liberty; why not use it? One more graceful can scarcely be devised. We have only to determine that it shall be appropriate, and all the world outside of us cannot wrest it from us.”

These cents were struck from the same 88% Copper and 12% nickel cupro-nickel alloy as the earlier Flying Eagle cent, and though that particular coin was short-lived it paved the way for the much more popular Indian Head. After 1864 the alloy changed to French bronze (95% Copper with a mix of tin and zinc).

At the time of the Civil War, U.S. coinage became very scarce as people began to hoard it. Silver coinage disappeared first. Then the cent began to disappear as merchants hoarded them. Premiums for cents rose, and many merchants began issuing their own bronze tokens. The bronze cent came about because of a few factors. First was the popularity of the bronze tokens. In addition, a shortage of imported nickel made it hard to get enough for the planchets. Finally the nickel in the coins made them much harder than a high-Copper alloy, which meant more wear on dies and machines and a higher likelihood of bad strikes. The bronze cent came into being partway through 1864, with some cents that year being struck from cupro-nickel and some struck from bronze.

These cents were among the most commonly circulated coins in the second half of the 19th century and the first few years of the 20th. Those cents were commonly collected starting in the 1930s, but were not widely studied until later when they began to phase out of pocket change. Even early editions of the Red Book had errors related to this cent, as few numismatists had spent the time to get familiar with them.

That has changed today. Now these cents are recognized as pivotal examples of American coinage, and they are commonly collected and studied.

Indian Head cents were struck in huge quantities, with the 1907 actually surpassing 100 million. That makes these pennies easy to get into collecting, particularly in lower grades. Even high grades are relatively inexpensive. There are quite a few better date Indian head cents which include the highly counterfeited 1877 as well as the last year of issue, the 1909-S.