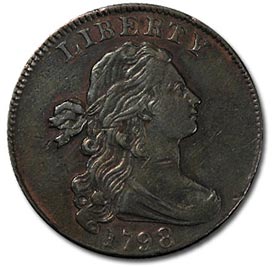 Large Cents are a highly collectible U.S. coin issue. These Copper coins, while only worth a cent, were almost as big as a half dollar. They were among the first coins produced by the U.S. Mint after the Coinage Act of 1792 established standard U.S. coinage.

The Large Cent had a simple but classic design. Like other issues of American coinage during this time period, it largely kept the same design as other circulating coins rather than having distinct issues for each denomination.

The original design of the Large Cent in 1793 was the head of Liberty with her hair held with a cap or ribbon, often referred to as the Flowing Hair. These were designed by Henry Voigt, as was the reverse. The reverse was controversial at the time and changed mid-year, as it depicted a chain that ran around the edge with the face value in the center. Voigt said it was to symbolize unity, but critics maintained it was a symbol of slavery that stemmed from Voigt’s Southern heritage. It was replaced by a wreath. There is a rare variety with four known specimens that has a little sprig of strawberry leaves and a blossom above the date, and it’s unknown where it came from or why it was struck.

These early cents were made with handmade dies, and each die was unique. These coins had problems with the chain motif showing through on the other side as well as the problems that come with individually-made dies like parts of the design cutting off, lines in the strike, and other errors.

Joseph Wright designed the next cent during 1793, replacing the obverse with a different design of Lady Liberty with her hair pictured with a Phrygian cap. This is commonly called the Liberty Cap design. The reverse of the coin had a redesign of the wreath, making it clear that it was made of laurel. These coins were made for a few years until 1796. There was a beaded edge variant in 1793 replaced by a 1794 toothed border. There were variants with vine and bar designs on the edge, a lettered edge, a toothed edge, a starred edge and a reeded (grooved) edge as the Mint experimented with various designs.

The Draped Bust design was created by Robert Scot, the chief engraver of the U.S. Mint at the time. As part of a redesign of current circulating U.S. coinage, Scot changed the reverse wreath to an olive wreath symbolizing peace. He also updated Liberty’s design to remove the cap and replace it with a ribbon as well as adding a drape-like garment to the bust (which gives this design its name). These ran until 1807 with several varieties of edges and small variations in the design. There are also overstrikes that can be found in some years.

The coin was redesigned in 1808, creating what’s commonly called the Classic Head design. Liberty now faced the opposite direction and wore a type of crown called a “fillet”. This design ran until 1814. There were no 1815 Large Cents minted. All 1815 Large Cents encountered are counterfeit.

The Liberty Head design by Robert Scot came next, modifying the design slightly. Most of the coins of this series fall in the so-called “Matron Head” subtype with an older-looking Lady Liberty, and this ran till 1835. These are sometimes called coronet heads. In 1835 the design was changed slightly to a younger-looking profile called the Braided Hair which ran through 1839. This was created by Christian Gobrecht, the new chief engraver of the Mint. These were supplanted by another Braided Hair variant, which ran through 1857.

The Large Cents enjoyed common circulation in the early 1800s and were minted almost every year with the exception of 1815. The War of 1812 disrupted the supply of copper planchets, with an embargo leading to a shortage of the supplies needed to strike these coins. In 1816 the war ended and the United States was able to obtain stocks again.

By 1857 these coins were becoming unpopular. At this point the Large Cent and half cent were phased out due to the increased cost of copper. They were replaced by smaller cents similar to the size of the ones we use today.

The Large Cent is one of the most collected types of U.S. coin. Their age and rarity make them a crown jewel for any numismatist, and due to their composition and age, few in good condition survive. Key dates include the first several years of mintage and their many different variants, a few early 1800s cents and the Large and Small Date variants produced in the last year of mintage.