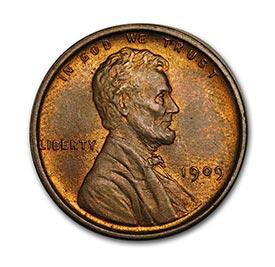 The Lincoln Cent was minted for the first time in 1909, and the obverse of the coin is still in use on the cent to the present day. These coins have a classic design and though the reverse has changed, these cents are among the longest-running designs in U.S. coinage.

Many numismatists today got their start with the first iteration of the Lincoln Cent. Today it is still occasionally possible to find the wheat cent in pocket change, though it is rarer than it used to be.

The Lincoln Cent was first commissioned to commemorate the 100th anniversary of Abraham Lincoln’s birth. These cents have the obverse of Lincoln’s head, and the original reverse was a pair of wheat ears flanking the denomination.

These early half cents were made with handmade dies, and each die was unique. These issues had problems with the chain motif showing through on the other side as well as the problems that come with individually-made dies like parts of the design cutting off, lines in the strike and other errors.

These coins came about because of Theodore Roosevelt’s desire to redesign U.S. coinage. If the coins had been designed less than 25 years before, it would have required an act of Congress to change them. But since the cent, the quarter eagle, the half eagle, the eagle and the double eagle had been in existence for more than 25 years, they were eligible for a redesign based on only the authorization of the Secretary of the Treasury.

Roosevelt complained in 1904 that U.S. coins were not aesthetically pleasing, and the mint hired sculptor Augustus Saint-Gaudens to come up with new designs. Saint-Gaudens was extremely sick at that point, and his assistants carried out the bulk of the work. Saint-Gaudens died in 1907 before completing the design of the cent. Sculptor Victor David Brenner was commissioned to create a new obverse for the cent in 1908. Brenner’s design bears a significant resemblance to an earlier plaque of Abraham Lincoln he had created.

Brenner’s first obverse designs drew inspiration from French Silver coins of the time, but Frank Leach, the Mint Director at the time, objected to the design. Brenner quickly created a reverse with the motto “E Pluribus Unum” and two ears of wheat.

Early pattern coins had Lincoln’s head slightly higher on the obverse, but the circulation strikes approved by President William Howard Taft had the head moved slightly down with the motto “In God We Trust” at the top of the coin.

Victor Brenner’s initials “V.D.B.” were placed at the bottom of the coin on the initial 1909 strikes, but after opposition, the initials were removed from the coin. It was determined that the placement and size of his initials were too much a part of the design. Brenner’s initials were not put back onto the coin until 1918 when they were placed on the base of Lincoln’s bust on the obverse, where they still remain today. Additionally, in an unrelated matter, the vending machine lobby complained that the new cents would not work in their machines, but eventually acquiesced.

These cents were originally struck in the same French bronze as the earlier Indian Head penny. This composition briefly changed in 1943 due to shortages and they were struck from steel, with a few errors in bronze and silver. From 1944 to 1946, cartridge cases were melted and used for coinage, and the composition changed to 95% Copper and 5% zinc. It then resumed its former French bronze composition until 1962 when it changed back to 95% Copper and 5% zinc. In 1982 the cent changed to its current copper-plated zinc.

Most of the cents that are commonly collected are the wheat reverse, often called the “wheat cent” or “wheat penny”. This series ran until 1959 when it was replaced with the Lincoln Memorial reverse. The current cent has replaced this design with a shield in 2010 after a bicentennial quarterly reverse release in 2009.

The Lincoln Cent was the first usage of a President’s face on commonly circulating U.S. coinage. These paved the way for much of our current coinage. Well-known chief engraver Charles Barber loudly opposed the redesign, but to no avail. It set a precedent.

Most Lincoln Cent collectors collect pre-1959 wheat cents. Most wheat cents are common and not very expensive, with the exception of error cents and a few key dates. The early V.D.B. cents with the San Francisco mint mark is considered the king of the key date Lincoln cents, while the 1914-D, the 1922 Plain (struck in Denver), and the 1931-S are also popular key date coins among collectors.