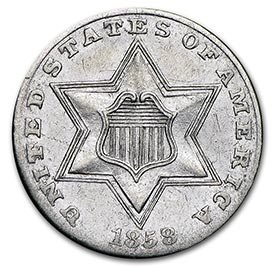 The U.S. Three-Cent Silver piece was minted from 1851 to 1873, and was both concurrent with and replaced by the three-cent nickel. The Three-cent Silver piece came about due to the decrease in postage rates, which dropped from five cents to three. This made it efficient to mint a smaller denomination coin that could handle the transaction easily.

The Three-cent Silver piece is by far the smallest of U.S. Silver coins, smaller than a dime. These coins were often called “trimes”, and they have the nickname “fish scale” because of their color and small size.

The original planchet composition was 75% Silver and 25% Copper to discourage melting for its metal content. The Silver content was raised to 90% in 1854, as circulation was lower than Mint officials would have liked. This continued through to the end of the series in 1873.

The obverse of this coin has a shield on a six-pointed star, while the reverse has its denomination in Roman numerals. There were a few smaller design changes over the lifespan of the coin, but the base design did not change.

The hoarding of coins during the Civil War led to the establishment of the base metal Three-cent nickel, a separate coin with the same denomination. By this point mintages of the Three-cent Silver piece had become extremely small. Its days were numbered. As the nickel took over what demand there still was for this coin denomination the Three-cent Silver eventually disappeared, with its last issue in 1873.

The postage changes drove the rise of the Three-cent Silver piece, and a variety of factors caused its demise. But outside of a few early issues it never saw large mintages, and it was a fairly short-lived design as far as coins go. Though it was more successful than the paper fractional currency notes, it never passed the popularity of the Cent and Five-cent pieces.

These coins are not incredibly expensive in their lower condition grades, but high-condition pieces can command a significant premium. The 1851-O is particularly popular as it was the only Three-cent silver ever to be minted at the New Orleans Mint. Another popular coin in the series is the 1862/1 in which you can clearly see, with a loupe albeit, the overdate, which is always popular with collectors. In general many of the Three-Cent silvers were melted in 1873, making them harder to come by than the mintages might suggest.