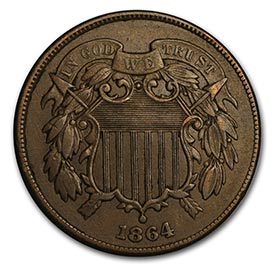 The Two-Cent Piece had a couple of false starts before it was first struck in 1864. These coins were only minted for a short time, largely due to a shortage in U.S. coinage from Civil War hoarding. Two-cent pieces were an emergency measure due to a need to get as much dollar value as possible out in coinage, as they were a size and type that was workable with current dies and equipment. The cost and speed of creating a Two-cent piece was comparable to that of creating Cents, so doubling the value was more efficient.

These coins only ran through 1873. There are a few earlier pattern coins for 1863 struck from the same bronze planchets as the final design, and there was an abortive attempt at striking Two-cent pieces in 1836. A few of these pattern coins in various metals survive but they are all one of a kind.

The Coinage Act Abraham Lincoln signed on April 22, 1864 changed the Cent, but it also made provision for a new bronze Two-cent piece. These small Cents and Two-cent pieces were meant to replace many of the private cent tokens that had been circulating, and they marked a change in philosophy for U.S. coinage.

Previous to this point all coins had been struck with the expectation that they would have a certain amount of intrinsic value due to their metal content. But the popular circulation of private tokens that had a very small amount of intrinsic value showed that people would still use coins that had less intrinsic value if they trusted the issuing authority. Bronze coins would not contain their face value in metal, and the striking of bronze coins indicated that the U.S. Mint was ready to move on from its previous philosophy.

The Two-cent coins were among the first to be able to incorporate a motto and change designs at the Mint Director’s discretion, so long as he had the Secretary of the Treasury’s approval. As a result they were the first U.S. coin to include the motto “In God We Trust”, today stuck on all U.S. coinage. The motto went through a few iterations before it was actually added to the coin, with “God Our Trust” and “God and Our Country” being among the suggestions which we can still see on pattern coins.

The design was a simple shield motif on the obverse with a wheat wreath surrounding the denomination on the reverse. The design was produced by James B. Longacre, and it draws obvious inspiration from the Great Seal of the U.S.

These coins and the small Cents of the same period were the first base metal coins to not contain their intrinsic value in metal. They set a precedent that has carried down to this day. Demand for the coins was so large that they had to increase production. They were extremely popular in their time, but rapidly dropped off in mintages. After the Civil War the minting of the new five-cent Nickel coin made these an unnecessary denomination. They fell out of favor and stopped being struck by 1873 when the Mint Act ended them. The 1873 coin only exists in proof.

In lower grades, almost all of these coins are very affordable. There are a few exceptions including the 1864 small motto and the 1872 issue (due to its small mintage). These coins command a significant premium.

Many of the Two-cent pieces issued were recalled to the Treasury for melting into one-cent pieces. Few numismatists will collect the two-cent piece as a series, instead they collect as part of a type set. Though the overall surviving population is not huge, demand has kept prices relatively low for much of the series.