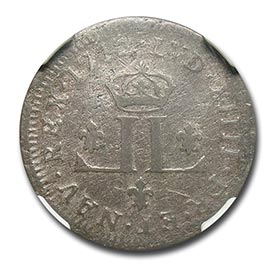 Counterstamped coins are not common in modern circulation, but in previous eras they were often used. Counterstamps or countermarks were a way to certify a coin had the proper Precious Metal content and was acceptable for legal tender in a region or with a certain merchant. These pieces are a unique part of numismatic history.

A counterstamped coin is not a particular type of coin, but rather something that was done to it. There are several different names for the practice depending on how it was done, including countermark, counterstamp, punchmark and chopmark. Coins were created with a specific design stamped onto them by the die when they were created, but at some point after their creation counterstamped coins were stamped by another authority.

Most of these coins are early U.S. Large Cents, but there are a wide variety of other coins as well, including most of the Capped and Draped Bust Silver quarters, half dollars and dollars. Trade dollars were often chopmarked, as they were designed for use in the Far East for trade and the practice of stamping a “chop” or small mark in the coin to certify its authenticity was common.

Early U.S. coins and foreign currency were often marked with a counterstamp, and there are many counterstamps that are well known for their use throughout the colonies and the fledgling United States of America. Some like “J.M. Taylor” are prolific and easily recognized by collectors.

Counterstamps were used for many different purposes. Some repurposed coins into tokens or tickets of admission. Others turned them into tokens accepted at a particular store or broker. Some were used as advertisements for business. Some U.S. coins were shipped to places like Puerto Rico and counterstamped to make them legal tender in that country. The purposes were varied.

Counterstamping fell out of favor over the years, and it’s unusual for it to be practiced in modern times. It falls in a zone of questionable legality. Alteration of currency is not necessarily illegal — machines to flatten and stamp pennies are commonly used to create souvenirs. But the government does not tend to appreciate counterstamping, and many of the reasons for its use are obsolete now.

Counterstamped coins are a unique collectible and the market can vary. It is a niche market among collectors. Some coins are collected in spite of counterstamps because there are not that many in existence, but others are collected because of them. Prices are very individual.