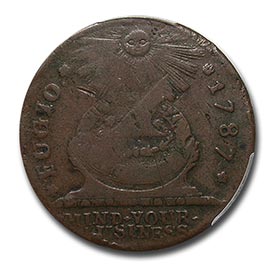 The early United States did not have a standardized monetary system, and it was a concern in early legislative sessions. The first coins issued by the United States were the Fugio cents, followed by a number of pattern coins as they worked to settle on the designs. Several of these patterns became the basis for the new national monetary system.

Foreign coins were not the only circulating currency in the New World. Private issues were also available, and there were circulating coins created by some of the states in both colonial and post-colonial times. There are several major private issues that were created in the Americas and saw varying degrees of circulation. There were also some issues created under British royal patent in the American colonies. Though the French did not own territory in the area of the British colonies of the time, they too had coins made by royal patent in the New World, and these also circulated.

The first fifty years or so of U.S. coins had to compete against this backdrop, circulating with counterfeits, tokens, regional issues and foreign coins. The first official U.S. coins were the Fugio Copper cents, authorized on April 21, 1787. Further specifications were added by July 6. The legends on the cent were attributed to Benjamin Franklin, though the first reference is in Congressional session while Franklin was living in France. The coin is sometimes referred to as the Franklin cent.

Fugio cents were struck from Copper in the year 1787, with a design based on a 1776 Continental dollar pattern that had never gone into major production. Most of the copper used came from military stores or salvage. The obverse of the coin showed the sun, a sundial and the legend “MIND YOUR BUSINESS”. The reverse showed a chain with 13 links and the motto “WE ARE ONE”. Abel Buell of New Haven, Connecticut created the dies.

After the 1787 Constitution was ratified, the motto “WE ARE ONE” was replaced by “E PLURIBUS UNUM” on U.S. Gold and Silver coinage. The legend on the back of the Fugio cent did not see further use.

The Fugio cent was the first coin of the new nation, and elements of its design were incorporated in coins moving forward. The chain motif was briefly used in early cents before it was abolished due to people thinking it was a reference to slavery.

Fugio cents are not cheap, but they are not out of range of average collectors in low grades. Low grades of some are available for a few hundred dollars. There are some very expensive variants, though, including the Reverse Rays and American Congress variant of the Pointed Ray die with no cinquefoils. These sell for hundreds of thousands of dollars. This coin was much rarer until 1948, when a hoard of cents owned by the Bank of New York hit the open market. They were originally discovered in 1926 and given out as souvenirs and keepsakes. All of these were in mint state condition, though some had brown toning and water damage.