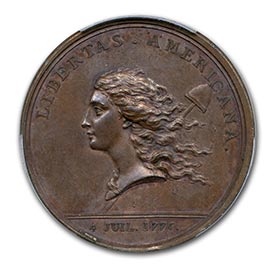 The early United States did not have a standardized monetary system, and it was a concern in early legislative sessions. The first coins issued by the United States were the Fugio cents, followed by a number of pattern coins as they worked to settle on the designs. Several of these patterns became the basis for the new national monetary system and the Libertas Americana provided inspiration for some of the early coins of the U.S.

The Libertas Americana got its start at the hands of Benjamin Franklin, who created the concept and mottoes after he was asked to create a monument of the Siege of Yorktown. Franklin outlined the idea in a letter to Chancellor of New York Robert Livingston in 1782, and the design was engraved and developed by Esprit-Antoine Gibelin and Augustin Dupré.

Franklin’s design incorporates a head of Liberty on the obverse, and this design was an inspiration for the first generation Liberty Cap coinage of the United States. The reverse showed the infant Hercules being attacked by a lion and strangling two serpents. Minerva is shown defending Hercules against the lion. Franklin stated that the infant Hercules symbolized America, while Minerva was France and the serpents were the armies of Britain at Saratoga and Yorktown. The lion was Britain, being kept at bay by the French.

Benjamin Franklin was the minister to France at the time and this design was created for a variety of purposes, including for presentation to the French. He presented medals in Gold to the king and queen and in Silver to the ministers at the court. There are between 100 and 125 examples known in Copper and a couple dozen Silver medals. No one knows where the two Gold medals went.

There have been reissues by the Paris Mint over the years, but the originals are the main versions of this medal that are collected.

The Libertas Americana laid the groundwork for the Liberty Cap design that made its way onto the first generation of American coinage. The reverse design did not make its way onto any coins, and the medals had a very small run. But as a symbol of the French and American partnership, these medals were a success.

These medals are extremely expensive because of the desirability and low population. The Silver medals in particular are hard to find, with the lowest grades fetching $40,000 and the highest fetching hundreds of thousands of dollars.