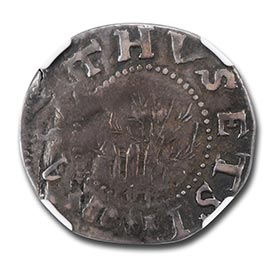 Foreign coins were not the only circulating currency in the New World. Private issues were also available, and there were circulating coins created by some of the states (most notably Massachusetts, but also Maryland and New Jersey). There were also some issues created under British royal patent in the American colonies. Though the French did not own territory in the area of the British colonies of the time, they too had coins made by royal patent in the New World, and these also circulated.

Massachusetts was authorized by the Crown to make its own coinage. Wampum had been the first medium of exchange, authorized in 1637 by the colonial government. Trade in kind like corn and bullets was common as well. Silver and Gold tended to go back to England. Wampum was used until 1661, but standard coinage was passed by the Massachusetts General Court in 1652.

These first coins came in threepence, sixpence and shilling sizes with little but a round Silver planchet and a small mark. Mintmaster John Hull took care of the striking in Boston. These rudimentary coins were vulnerable to clipping and counterfeiting, so they were replaced by the Willow Tree, Oak Tree and Pine Tree designs in succession.

Each die at this time was individually made, and thus coins can be distinguished by the die used to create them. All bore the date 1652, though they were struck from 1653 to 1682. After 1682 this coinage was abandoned.

After the Revolutionary War, official U.S. coinage began to make its way out into the colonies. But these coins were used alongside foreign coins, tokens and other issues for decades to come.

These metallic currencies were the first to be issued in the English part of the Americas. The Spanish got in ahead of the English with their Mexico City mint, established in 1535. These are important coins in U.S. history and the history of the New World colonies.

These coins are expensive, rare and highly prized. They are also highly individual. Because of the handmade dies, coins can be collected in types based on the die that was used for the strike.