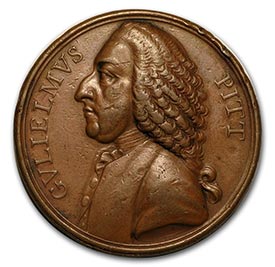 Foreign coins were not the only circulating currency in the New World. Private issues were also available, and there were circulating coins created by some of the states in both colonial and post-colonial times. There were also some issues created under British royal patent in the American colonies. Though the French did not own territory in the area of the British colonies of the time, they too had coins made by royal patent in the New World, and these also circulated. There are several major private issues that were created in the Americas and saw varying degrees of circulation.

There were various private and regional tokens that saw circulation in the years after the Revolutionary War. These included coins struck in the United States as well as issues from outside the fledgling nation.

The Copper or brass North American tokens were struck in Dublin, Ireland, and made their way to America in small quantities. They saw most of their circulation near the Canadian border. The obverse has a seated figure of Hibernia with a harp, while the reverse shows a ship. The dates of these coins are much earlier than their actual mint date.

The Bar Copper is unknown in origin and date, but likely circulated in 1785 and may have been made in England. Circulation was limited to New York at first though it may have spread from there. This coin has a monogram of “USA” on one side, while the other has 13 bars symbolizing the states.

Many tokens were struck in England and made their way across the Atlantic. Auctori Plebis, Kentucky, Myddelton, Copper Company of Upper Canada, Theatre at New York and North West Company tokens are all tied back to England. These tokens were used in commerce in the United States even though some were not necessarily designed for it.

The Mott Store Card token was used as a business card. Though the die has 1789 as the date, these were struck no earlier than 1807 by most numismatic estimates.

In 1790 a Baltimore silversmith by the name of Standish Barry created a Silver threepence. The obverse head is likely local politician James Calhoun, and the reverse has the intended denomination. Barry’s aim was likely to drum up business for his shop.

Albany, New York’s First Presbyterian Church had a problem with bad-quality Copper coins winding up in the collections, and they decided to take steps to curb this. They issued their own pennies. These coins are very simple planchets with a stamp that says “Church Penny”, though some also have a “D” above this legend (the British abbreviation for a penny). Only a thousand of these were struck.

The trading company Talbot, Allum and Lee imported a large number of English Copper tokens with their name from 1794 to 1795. Many of these were used later by the early U.S. Mint to create 1795 and 1797 half cents.

A proposed French settlement called Castorland generated its own set of tokens, as the directors of the company proposing it were given these for their board meetings. These are found in Silver and bronze, and there are newer restrikes on the same 1796 die.

One unique issue came from Texas, known as New Spain at the time. Manuel Pardo, governor of the territory, authorized 8,000 Copper coins called “jolas”, then 8,000 more the following year. These pieces are very rough, showing the denomination, initials of the maker and the date on the obverse. The reverse is a five-pointed star. There are two varieties, one coined in 1817 and one in 1818 by different makers.

Most of these are rare today and some varieties are entirely unique. Many mintages were small, and die variation means there are plenty of types to collect. These coins may not be official U.S.-minted coinage, but they tell the smaller stories of the companies and people that made up the country at the time.

Most of these coins are expensive and rare in higher grades, and for those that are unique the price can be very steep. A few of these coppers can be had for less than a hundred dollars in lower grades, but high grades can rapidly get expensive. Mintages were extremely low for many of these tokens as they were not meant for circulation outside of their region.