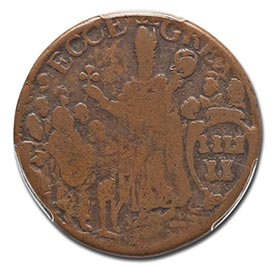 Foreign coins were not the only circulating currency in the New World. Private issues were also available, and there were circulating coins created by some of the states in both colonial and post-colonial times. There are several major private issues that were created in the Americas and saw varying degrees of circulation. There were also some issues created under British royal patent in the American colonies. Though the French did not own territory in the area of the British colonies of the time, they too had coins made by royal patent in the New World, and these also circulated.

During and after the Revolutionary War, a few states turned to creating their own coinage. New Hampshire was the first. The State House of Representatives approved a small run of pure copper coins in 1776 just after the Declaration of Independence. Though there were pattern coins prepared by a man named William Moulton, it does not seem likely they were ever put into circulation.

There were a few non-official issues in Massachusetts struck from Copper. These pieces are unique today, with only one of each type known to exist. More official coinage was established by the Massachusetts General Court in 1786; coining began in 1787 and ran through 1788. These coins were Copper cents and half cents, and the first coins to bear that denomination. There are a wide variety of designs for this, but the general design on the obverse was a standing Native American with a bow and arrow and the reverse a heraldic eagle.

Connecticut had its own mint, established in 1785. Most of these are very crude and there are many die varieties. These coins were struck from 1785 through 1788. There is a high degree of variation in the strikes because of die variation and bad planchets.

One of New York’s post-colonial issues is well known: the Brasher Doubloon. Goldsmith Ephraim Brasher created these likely starting in 1786, though the date on the earliest coins says 1742. These coins are called “Lima style” after their Spanish appearance. The better-known version is the 1787 Gold doubloon, which has an eagle on one side and the arms of New York on the opposite. Brasher created other Gold coins with his “EB” mark as well, but the doubloon is the best known. These appear to have been an attempt to create circulating coinage but it’s unclear why.

There were also several unauthorized mintages of Copper coins in different states, primarily New York, Vermont and Connecticut. Machin’s Mills is the most famous of these, and this firm operated in secrecy in those three states creating both original coins and imitations of British Copper coins. Brasher and a partner, John Bailey, also had their own mint creating Copper pieces. It is unknown whether they had approval for this or not, or to what extent there may have been partnership with the state of New York. There were plenty of counterfeit British pence and halfpence in circulation that were struck around this time as well, and they were struck in both Britain and America. Many of these are connected to Machin’s Mills and Brasher.

New Jersey authorized Copper coinage in 1786, and Thomas Goadsby, Albion Cox and Walter Mould were given the mandate to coin three million coppers. Matthias Ogden was also involved from New York and created some as well. These coins were struck from 1786 through 1788 with over 140 die varieties. The obverse shows a horse’s head, while the reverse shows a shield and the first use of the legend E PLURIBUS UNUM.

Vermont granted permission to Reuben Harmon, Jr. to coin Copper starting in 1785. Harmon’s coins were mostly created in Rupert, Vermont but some later issues were created by the Machin’s Mills firm. Most of these coins are on defective planchets and there are a variety of different designs used. Though he was only granted a two-year license originally, coins were struck through 1788.

Most of these are rare today and some varieties are entirely unique. Many mintages were small, and die variation means there are plenty of types to collect. These coins may not be official U.S.-minted coinage, but they tell an important story about early American money and the rudimentary efforts of the new nation to create its own monetary system.

Most of these coins are expensive and rare in higher grades, and for those that are unique the price can be very steep. Many of the coppers can be had for less than a hundred dollars in lower grades, but high grades can rapidly get expensive. Collectors have a variety of type sets to pursue for some of the better-known issues where many die variations have been classified.