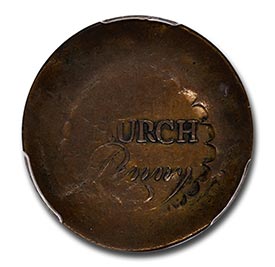 Foreign coins were not the only circulating currency in the New World. There were also some issues created under British royal patent in the American colonies. Though the French did not own territory in the area of the British colonies of the time, they too had coins made by royal patent in the New World, and these also circulated. Private issues were also available, and there were circulating coins created by some of the states (most notably Massachusetts, but also Maryland and New Jersey). There are several major private issues that were created in the Americas and saw varying degrees of circulation.

The New Yorke in America token was issued by governor Francis Lovelace. The obverse shows Cupid and Psyche, while the reverse shows a heraldic eagle on Francis Lovelace’s family coat of arms. These may have been struck in Bristol, England, and though they were America-related they were unlikely to have circulated in America.

The Gloucester tokens were likely a pattern coin for a private shilling by Richard Dawson of Gloucester, Virginia. These brass coins only have two examples known today. One side shows a house while the other shows a five-pointed star. The legend indicates that the coins were dated to 1714 or 1715, though both known coins are in bad condition and hard to read.

The Higley or Granby Coppers were never officially-authorized tokens, but they may have seen some circulation. Dr. Samuel Higley was the originator. These coins came from his private copper mine near Granby, Connecticut, and after he died his brother John continued striking them. The obverse has a deer, while the reverse has 3 hammers. Originally the legend said “THE VALUE OF THREEPENCE”, but as quantity outstripped demand Higley was forced to change the stated value to “VALUE ME AS YOU PLEASE”.

Hibernia-Voce Populi tokens were not specifically made for the American market but likely made their way across the Atlantic with Irish immigrants. They were struck by Roche in King Street, Dublin in 1760.

Pitt tokens were struck in farthings and halfpennies, and these were likely commemorative though they may have circulated due to their brass or copper content. These halfpennies filled in gaps where coinage was not available. The obverse shows the face of British politician William Pitt, while the reverse shows a ship.

Rhode Island Ship medals showed the flagship of British admiral Lord Richard Howe, with the reverse showing the retreat of American forces from Rhode Island in 1778. These coins were struck for a Dutch audience and were likely created in England as propaganda against the American cause, though they were found in America too.

All of these issues are fairly uncommon today. They were not minted in huge numbers. Some saw circulation due to lack of coinage in the local area (particularly the John Chalmers issues and the Granby Coppers). Other tokens were not struck as circulating coinage but were used as such because of their metal content. At the time these were in use, money was much less standardized than it is today and many different things were used as payment, so a counterfeit token with actual metal content might circulate right next to official national coinage.

These coins are expensive, rare and highly prized. They are also highly individual. Because of the handmade dies, coins can be collected in types based on the die that was used for the strike. Some of these are pattern coins or have very few examples surviving.