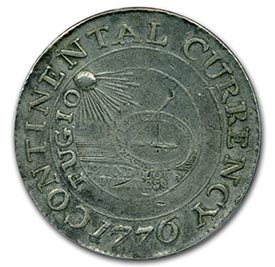 Foreign coins were not the only circulating currency in the New World. Private issues were also available, and there were circulating coins created by some of the states (most notably Massachusetts, but also Maryland and New Jersey). There were also some issues created under British royal patent in the American colonies. Though the French did not own territory in the area of the British colonies of the time, they too had coins made by royal patent in the New World, and these also circulated.

Massachusetts was authorized by the Crown to make its own coinage. These first coins came in threepence, sixpence and shilling sizes with little but a round Silver planchet and a small mark. Mintmaster John Hull took care of the striking in Boston. These rudimentary coins were vulnerable to clipping and counterfeiting, so they were replaced by the Willow Tree, Oak Tree and Pine Tree designs in succession.

The Lord Baltimore coins were created under Cecil Calvert, the second Lord Baltimore over Maryland. Calvert ordered shillings, sixpence and groats in 1659, and his right to strike coins was upheld by the government of Oliver Cromwell. This issue was small, and though it circulated through Maryland it disappeared from circulation by around 1700. These coins featured Calvert’s portrait on the obverse with the words “Lord of Mary’s Land” in Latin. The reverse of larger coins had the coat of arms of the Baltimore family as well as the denomination in Roman numerals.

New Jersey saw the St. Patrick or Mark Newby coins, which were likely struck in Dublin sometime between 1663 and 1672. The General Assembly of New Jersey ruled that these coins were made legal tender in 1682. These coins existed in both farthing and halfpenny form. The obverses have a king playing a harp while kneeling. Both reverses show St. Patrick, but the halfpence shows him surrounded by people and the farthing shows him driving away serpents. This coin often has a brass insert over the crown on the obverse, meant to make counterfeiting more difficult.

Some coins were authorized by British royal patent. These included the tin American Plantations coins of 1688, the William Wood Rosa Americana coins, the Hibernia coins and the 1773 Virginia halfpennies. Of these all were struck in the New World except for the Hibernia coins, which were created for Ireland and exported to the Americas.

All of these issues are fairly uncommon today. They were not minted in huge numbers. But among them are several very important issues, including the first coins minted in the English-speaking colonies (the Massachusetts Silver coins) and the first royally authorized coins in the British colonies in America (the American Plantations tin coins).

Most of these coins are expensive but a few can be had fairly cheaply. It depends on the issue. In low grades some are reasonable (including the Hibernia halfpennies). Aside from that, though, these coins are expensive, rare and highly prized. They are also highly individual. Because of the handmade dies, coins can be collected in types based on the die that was used for the strike.