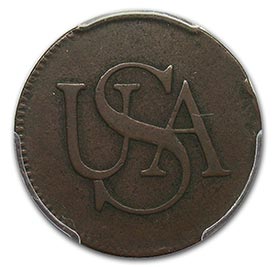 The early United States did not have a standardized monetary system, and it was a concern in early legislative sessions. The first coins issued by the United States were the Fugio cents, followed by a number of pattern coins as they worked to settle on the designs. Several of these patterns became the basis for the new national monetary system.

The first pattern coins to be designed for the new coinage of the United States were the Nova Constellatio coins. These were created by Benjamin Dudley. Gouverneur Morris (most notable for his writing of the Preamble to the Constitution) had an idea for a decimal-based coinage system, which was different to both the Spanish and the English systems that had commonly seen circulation in the colonies.

Dudley’s designs had an eye with rays around it and thirteen stars arrayed around the outside of the rays for the obverse, while the reverse had a simple wreath and the denomination. These coins were denominated in units and the 1,000-unit coin was called a “mark”, while the 500-unit coin was called a “quint”. There were also five- and 100-unit coins struck as well. These coins are unique, with only single specimens of each type and subtype surviving today.

Morris’s idea for decimal coinage would bear fruit in the 1792 pattern coins created for the first set of U.S. money. There was a Silver center cent, a cent with a birch wreath on the back called the Birch cent, a half disme, and a disme. All of these were created in 1792. Some even saw circulation, particularly the 1792 disme. All had the face of Liberty in her Flowing Hair variation on the obverse. The half disme and disme had an eagle on the reverse, while the reverse of the cents had a wreath. The 1792 quarter dollar pattern had a Liberty head with an eagle on the obverse. This pattern was created by Joseph Wright, who was George Washington’s choice for chief engraver but died before he could ascend to the position.

Aspects of these designs made their way to the circulating coinage that followed quickly after this. Though these small coins were not meant for wide circulation, they laid the groundwork for the coins that followed. The Flowing Hair design and some of the reverses of early U.S. circulating coins pulled directly from these early patterns.

These coins were the foundation of U.S. coinage. The Nova Constellatio was a proof of concept of decimal-based money, while the pattern coins that followed in 1792 were designs that followed on in circulating coinage. These coins set the precedent of decimal-based coins. When the Coinage Act of 1792 passed, it established the dollar as the set unit of measurement and created denominations that still exist today in many cases.

These coins range from the hundreds of thousands of dollars to literally priceless, both due to their numismatic value and their historic significance. The designs are not noteworthy of themselves but the rarity and the uniqueness of these coins makes them highly desirable and collectible.