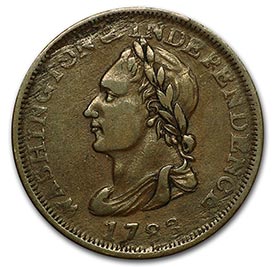 The early United States did not have a standardized monetary system, and it was a concern in early legislative sessions. The first coins issued by the United States were the Fugio cents, followed by a number of pattern coins as they worked to settle on the designs. Several of these patterns became the basis for the new national monetary system, while others like the Washington pieces faded into obscurity.

George Washington was a hero not just in the Americas, but overseas after the Revolutionary War’s conclusion. As the victorious general and one of the key characters in U.S. politics and the military at the time, his name loomed large for anyone who loved the ideals of freedom that were named in the Declaration of Independence. His status as the central figure of the revolution was cemented, and commemorative coins and medals bearing his likeness were struck by several different mints.

Washington pieces were struck on both sides of the Atlantic from 1783 through 1795. There were coins, tokens and medals that were usually denominated in halfpenny or penny denomination. These circulated in the United States alongside many other counterfeit or regional cent tokens. English specimens are often better preserved, as they were not used in circulation.

Some of these coins were struck in brass, others in copper. There were a variety of designs from different mints. The Georgivs Triumpho tokens, Getz patterns, Liberty and Security tokens, North Wales halfpennies and Success medals are among the best known of these. These tokens all had the likeness of Washington on the obverse and a variety of reverse designs.

There are some common tokens like the 1783 Unity States and the 1793 Ship halfpenny. These can be found for a reasonable price in lower grades. There are some very rare and unique specimens that have a high premium, though, including the 1791 copper cent and the “Ugly Head” satirical token.