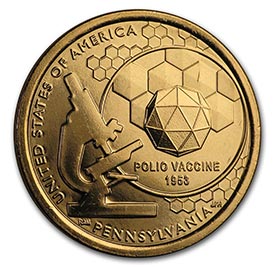 These coins are almost always historically significant and are usually issued either for commemorations or to collect money for monuments or celebrations. Before 1982, U.S. commemorative coins were often created by a commission in charge of the event. The coins would be sold for a premium over the regular price of the coin to collect seigniorage. After 1982 commemoratives came through the U.S. Mint. Some of these still had the old Precious Metal content of previous years while others were only clad coins. The American Innovation dollar falls in the latter category.

The American Innovation dollar was signed into law on June 20, 2018. Like the other post-Sacajawea dollars, the American Innovation was never meant for circulation. It is struck in regular Brilliant Uncirculated condition as well as proof and reverse proof. Some of these were also sold in sets. The design rotates, with reverses designed to honor examples of innovation from all the states and territories as well as the District of Columbia. The obverse shows a picture of the Statue of Liberty.

The American Innovation dollar is composed of 77% Copper, 12% zinc, 7% manganese and 4% nickel around a core of pure Copper. Unlike many other collectible commemoratives, these are not available in Precious Metal versions. Uncirculated coins are minted in Philadelphia and Denver, while proof and reverse proof coins come exclusively from the San Francisco Mint.

Modern commemorative coin issues like the American Innovation series were sold after 1982 and did not have the same selling structure as previous commemoratives. These were unique, but they were not sold by a commission. Instead they came directly from the U.S. Mint, but for the same purpose of collecting seignorage. There are exceptions (such as the Mount Rushmore Golden Anniversary, which was split between the Treasury and the Mount Rushmore National Memorial Society of Black Hills, South Dakota), but most fall under this pattern. These coins have smaller mintages than commemorative coins of the past and collectors are more willing to take them on.

Commemorative value can be volatile. Many of them had low mintages and surviving populations, which can drive prices up dramatically. Some issues were firsts, including the first U.S. coin to have a U.S. president and the first U.S. coin to have a living president. Modern commemoratives have low mintages but are less expensive to collect than older ones, and clad coins like the American Innovation dollar do not have the intrinsic value of the Precious Metal supporting their price. Commemorative value isn’t completely stable and is worth checking on a more regular basis than some other coins.