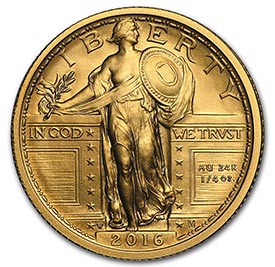 Commemorative coins have a long and storied history with origins dating all the way back to Classical Greece. From the Mughals to the West Germans, governments have created special coins created to memorialize great people and events. Commemoratives are collectibles, and usually are not made for circulation (though they may be in some cases, such as the 50 State Quarters or Washington quarter). These coins are almost always historically significant and are usually issued either for commemorations or to collect money for monuments or celebrations. Before 1982, U.S. commemorative coins were often created by a commission in charge of the event. The coins would be sold for a premium over the regular price of the coin to collect seigniorage. After 1982 commemoratives came through the U.S. Mint. Some of these still had the old Precious Metal content of previous years while others were only clad coins.

Gold commemorative coins were not as common, but there were several issues that were struck between 1903 and 1926. These were struck as Gold dollars, quarter eagles and fifty-dollar Gold pieces. Most of them were Gold dollars. Once the Mint began making commemorative coins again in 1982, Gold was back on the table, with the first issue coming in 1983 with the Olympic Torch Bearers Gold ten dollar coin. This was the first Gold piece issued in the United States in over 50 years, and the first coin to ever have a W mint mark for West Point.

The 1916 Centennial Series is something of an exception to this rule. These coins are minted from 99.99% Fine Gold, and they come in a set of three: the Liberty Walking half dollar, the Standing Liberty quarter and the Mercury dime. All three are the 1916 designs that were created in Teddy Roosevelt’s coin refresh efforts.

Roosevelt was one of the major forces pushing for new, more artistically interesting coins, and he got his way in 1916 when these three coins were released. These designs are widely praised by numismatists and considered classics of U.S. coinage, and the 2016 reissue was a homage to the originals.

These commemorative coins are specifically tied to numismatic history, and as such have distinctly more value for collectors they might for laymen. These coin designs were classics and the homage to them is a low mintage. High-quality examples of these coins are issues many will want to collect.