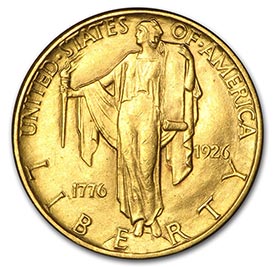 These coins are almost always historically significant and are usually issued either for commemorations or to collect money for monuments or celebrations. Before 1982, U.S. commemorative coins were often created by a commission in charge of the event. The coins would be sold for a premium over the regular price of the coin to collect seigniorage.

Gold commemorative coins were not as common as Silver, but there were several issues that were struck between 1903 and 1926. These were struck as Gold dollars, quarter eagles and fifty-dollar Gold pieces. Most of them were Gold dollars.

One of the most unique issues was the fifty-dollar Gold piece as part of the Panama-Pacific International Exposition. There were round and octagonal versions of this large Gold piece that were created, and even in low grades they are very expensive and rare today. These coins were usually designed with a unique obverse and reverse. They were sold by the commission in charge of the event and given a premium over the actual price of the metal or face value of the coin.

These commissions leaned on specialty coin issues to create revenue, but over time the market got so clogged with commemoratives that there was a backlash. Detractors pointed to the large stocks of commemorative half dollars on hand when it came time to create a commemorative coin to honor George Washington, saying it wasn’t worth creating another commemorative issue if all it was going to do is sit in a vault and not move. Chief among these was the president at the time the Washington coins were being debated, Herbert Hoover.

When you look at Silver commemorative coins, a large number of them came out from 1900 through the 1920s. Hoover hated the idea of adding to this list of half dollar issues, particularly due to the large number of uncirculated Oregon Trail Memorial coins. Coins were selling badly and Hoover thought the addition of more designs would cause problems with counterfeiting. The solution proposed was to replace the half dollar design for an entire year, but before the plan could be put in place, the Washington quarter was brought into being by legislation in the House of Representatives.

Despite Hoover’s strenuous objections, commemorative coins continued to be struck by commissions for fundraising through 1954. Most of these were half dollars and dollars due to the large size, which made it easier to showcase a unique design. Some quarters and smaller Gold dollars were also struck through this time period.