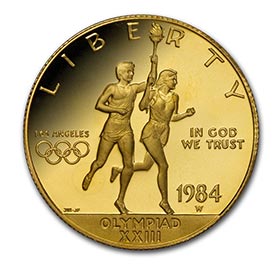 These coins are almost always historically significant and are usually issued either for commemorations or to collect money for monuments or celebrations. Before 1982, U.S. commemorative coins were often created by a commission in charge of the event. The coins would be sold for a premium over the regular price of the coin to collect seigniorage. After 1982 commemoratives came through the U.S. Mint. Some of these still had the old Precious Metal content of previous years while others were only clad coins.

Gold commemorative coins were not as common, but there were several issues that were struck between 1903 and 1926. These were struck as Gold dollars, quarter eagles and fifty-dollar Gold pieces. Most of them were Gold dollars. Once the Mint began making commemorative coins again in 1982, Gold was back on the table, with the first issue coming in 1983 with the Olympic Torch Bearers Gold ten dollar coin. This was the first Gold piece issued in the United States in over 50 years, and the first coin to ever have a W mint mark for West Point.

The first modern commemorative was the 1982 George Washington 250th Anniversary of Birth half dollar. Other issues followed on rapidly from that point, and commemoratives are regularly issued by the U.S. Mint today. There are also specific sets that can be bought from the Mint that contain several different coins.

Modern Gold commemoratives are usually $5, though $10 coins have also been struck.