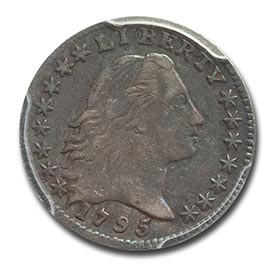 The half dime was a coin struck for a good chunk of American history. These were sanctioned originally in the Coinage Act of 1792, and these small Silver coins filled a need for a middle denomination between the penny and the dime that was later filled by the base metal nickel.

The first half dime (called a half disme, pronounced “deem”) was probably a pattern coin, though debate rages over whether or not it was produced as a business strike. The U.S. Mint recognizes the 1793 Chain cent as the first business strike coin in U.S. history, but the 1792 strike of the half dime was at least 1,500 pieces.

The officially recognized first business strike of the half dime was in 1794. This design, called the Flowing Hair and engraved by Robert Scot, was shared with the half dollar and dollar coins of the same time period and ran from 1794 to 1795. Few of these survive, and the ones that did are rare and expensive in higher grades. Half dimes from this point until1837 were struck from 89.24% Silver and 10.76% Copper.

The Draped Bust design was created by Robert Scot, the chief engraver of the U.S. Mint at the time, and ran from 1796 to 1805. As part of a redesign of current circulating U.S. coinage, Scot changed the reverse wreath to an olive wreath symbolizing peace. He also updated Liberty’s design to add a ribbon as well as adding a drape-like garment to the bust (which gives this design its name). These ran with two different reverses and minor changes, including variable numbers of stars. There are also overstrikes that can be found in some years.

The Capped Bust came next, a John Reich design engraved by William Kneass. After the half dime began to be struck again in 1829, the portrait changed to Liberty with a cap on her head. These were struck in fairly large numbers for the time. These were changed in 1837 to the Liberty Seated, which was struck at only the Philadelphia Mint in 1837. The New Orleans Mint began striking dimes in 1838.

The Liberty Seated design was created from 1837 onward, with minor changes in the design over that time period. A small amount of extra drapery was added at the elbow of the seated figure of Liberty in 1840, and in 1853 arrows were added to indicate the reduction of Silver weight. This variety was replaced by the former design again in 1856. The legend of “United States of America” was moved to the obverse starting in 1860, and there are a few 1859 and 1860 pattern coins from the Philadelphia Mint that show the transitional pattern. In 1873 the half dime was phased out, as it was becoming redundant due to the nickel.

The half dime was minted with few interruptions for almost a hundred years, making it one of the most common early U.S. coins to circulate. It was the small Silver denomination of choice until the nickel superseded it, and the nickel’s rise led to the change from Precious Metal circulating coins to base metal that we see today.

Early half dimes are very hard to find, but later mintages are more common. Some early types in the Capped Bust series are available for a fairly reasonable price in lower grades. Higher grades can get prohibitively expensive very fast. Flowing Hair and Draped Bust examples in higher grades are out of range of all but the most dedicated and well-heeled collectors, and even low-grade examples cost hundreds of dollars.

The higher populations of later series like the Liberty Seated make them a much easier prospect for intermediate collectors. Early examples of U.S. coinage including the half dime are not easy to get one’s hands on.