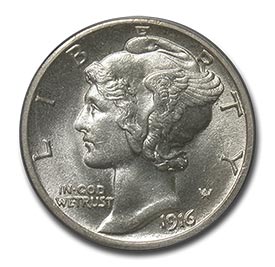 The dime has been struck with few interruptions from the beginning of U.S. coinage to the present day. These were sanctioned originally in the Coinage Act of 1792, and these small Silver coins were the 10-cent piece from their inception until now.

The dime was struck for circulation first a few years after its smaller sibling the half dime and was based on the same planchet. Early dimes were struck from 89.24% Silver and 10.76% Copper, an alloy that was slightly modified for future releases like the Liberty Seated. The alloy was changed at that point to 90% Silver, a percentage it would retain until the demise of most U.S. Silver coinage in 1964. The Mercury dime was minted out of this 90% Silver alloy.

The coin is commonly called a “Mercury” dime as it resembled the Roman god, but just like many other U.S. coins, the head is a representation of Liberty. This head has wings as a representation of “liberty of thought.” Adolph Weinman’s design was well liked, but it had some problems with vending machines and the design needed minor modifications after the fact.

Weinman’s design overlapped with the Barber dime in 1916 due to the time it took for the design to be approved. The months of no new coins meant the U.S. Mint had to do something to address the problem of a possible coin shortage, and acting director Fred H. Chaffin struck Barber dimes and quarters to meet demand. When the Mercury dime was approved, the issues with striking put them even further behind, and for much of the year the Barber coins were the only coins available. Mercury dimes were struck starting on October 30, 1916.

Weinman had studied under famed sculptor Augustus Saint-Gaudens, well-known for his design of the double eagle, and they shared some similar tastes which can be seen in the Mercury dime. The feathers in relief are a Saint-Gaudens touch shared by many of his apprentices.

The obverse is Liberty with a winged cap, while the reverse is a fasces with olive branches. The fasces combined with the olive branches symbolizes unity as well as peace, and the fasces may also represent war and justice. This ancient Roman symbol of authority is in keeping with the coin’s style.

The Mercury Dime ran until 1945, when President Franklin D. Roosevelt died. The public clamored for a new coin with his face, and the close association Roosevelt had with the March of Dimes made the 10-cent coin an obvious choice. The Mercury dime was thus replaced by the Roosevelt.

The Mercury dime was part of one of the most dynamic eras in U.S. circulating coinage, a time when many new ideas were being brought to the table and put into action. Theodore Roosevelt’s push to modernize U.S. coins wrought far-reaching changes even after he left office, and though the Mercury dime may not owe its genesis to him the movement he pushed laid the foundations for today’s coins.

Mercury dimes are readily available for most years in lower grades, but there are a few key dates and errors that are highly collectible. The 1916-D had a very low mintage due to the Denver mint switching to mostly quarters to keep up with production of those, meaning dimes were barely minted. The 1921 and 1921-D coins also have low mintages and are favorites among collectors. Lastly the 1942/1 overdate is extremely popular, and thus somewhat pricey even in lower grades, because the overdate is clearly visible with the naked eye.