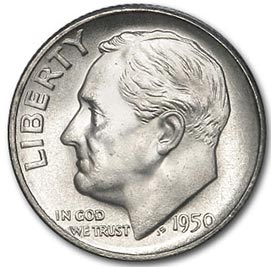 The dime has been struck with few interruptions from the beginning of U.S. coinage to the present day. These were sanctioned originally in the Coinage Act of 1792, and these small Silver coins were the 10-cent piece from their inception until now. The Roosevelt dime bridged the gap between the Silver coins of previous generations and the new cupro-nickel coins of today.

The Roosevelt dime was preceded by the so-called “Mercury” dime, named for the winged head of Liberty on the obverse. The Mercury Dime ran until 1945, when President Franklin D. Roosevelt died. The public clamored for a new coin with his face, and the close association Roosevelt had with the March of Dimes made the 10-cent coin an obvious choice. The Mercury dime was thus replaced by the Roosevelt. This process took place rapidly. The new dime was designed and in production by 1946.

The dime has been in production with mostly the same design since that year. Minor changes have been made (slight changes to the portrait’s hair and the movement of the mint mark), but other than that this coin has existed with little change.

The design of this coin, created by chief engraver John Sinnock has an obverse with Roosevelt’s face and a reverse with a torch flanked by an olive and oak sprig. This reverse is similar to the Mercury dime, but removes the fasces for a more recognizable image and adds the oak.

The one major change that occurred with this coin is the one that happened to all U.S. Silver coinage. The planchets for dimes used to be made from 90% Silver, but the 1965 Coinage Act changed all that. Starting in the late 1950s, people had begun hoarding U.S. Silver coinage due to increased demand, which drove the price of Silver well over the face value of the coins. This led to chronic shortages, and when it became clear that the Mint’s Silver stocks would not hold up to this demand the government decided to step in.

At this point U.S. Silver coinage for all small denominations was changed to cupro-nickel, with dimes being made from a cupro-nickel alloy over a copper core. Half dollars were debased and reduced to just 40% Silver until 1970 when halves were made entirely of cupro-nickel.

Franklin Delano Roosevelt’s death was an important event in American history given how long he was in office and the fact that he was president through the Great Depression and World War II. The establishment of his face as the face of a coin immediately after his death indicated the impact he made. The dime bearing his name was struck first on January 19, 1946 and went into circulation on January 30 — which would have been his birthday.

Roosevelt dimes are still collected today, but many are collected primarily for their bullion content as “90%” or “Junk” Silver. The same goes for quarters from the same time period. Low-grade specimens are bought in bulk bags and sold in lots instead of for their numismatic value. Most collectible dimes are available for a very reasonable price (barring errors) due to the very high mintages and survival rates. There are no particularly rare dates.