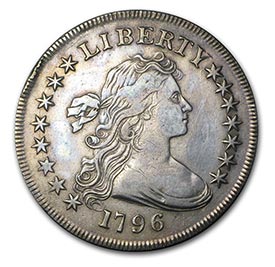 The dollar was one of the foundational denominations of American coinage from the very beginning, and though it has fallen out of favor today it played a huge role in the monetary system of previous years. These coins were sanctioned originally in the Coinage Act of 1792 and were first minted in 1794.

Dollars were one of the several denominations authorized by the Coinage Act of 1792. Early dollars, as with all other U.S. Silver coinage of the time, used a 89.24% Silver and 10.76% Copper composition, an alloy that was slightly modified in future releases.

The first dollars were struck in 1794. This design, called the Flowing Hair and engraved by Robert Scot, was shared with the half dime and half dollar coins of the same time period and ran from 1794 to 1795. Few of these survive, and the ones that did are rare and expensive in higher grades.

The Draped Bust design was created by Robert Scot, the chief engraver of the U.S. Mint at the time, and ran from 1795 to 1804. As part of a redesign of current circulating U.S. coinage, Scot changed the reverse wreath to an olive wreath symbolizing peace while keeping the eagle. He also updated Liberty’s design to add a ribbon as well as adding a drape-like garment to the bust (which gives this design its name). These ran with two different reverses and minor changes, including variable numbers of stars. There are also overstrikes that can be found in some years.

Errors, overstrikes and variants of these coins are more common than they are in later coinage. That is because of the crude nature of the process by which they were made. Coin-making technology has come a long way since those strikes and later coins were changed less than these earlier varieties.

Early U.S. coins were not the only coins the post-colonial America had. French, Spanish and English coins circulated freely and were accepted as legal tender, and the mintage of new U.S. money did not stop these from circulating. The dollar circulated but competed against these coins, particularly these early Bust dollars. These were important because they were among the first U.S. coins minted, but in terms of day-to-day living at the time of their mintage their impact was muted. It was not till far later that foreign coinage was banned from use as legal tender and U.S. coins became the standard.

Spanish pieces of eight were the most common replacement for the dollar coin, as the dollar was actually based on these common circulating coins. They were very close in size and value but the difference in value between them was the basis for problems down the line and was a direct cause of the stoppage of Silver dollar production between 1804 and 1836.

At this point the Mint stopped creating Silver dollars. The Silver dollar had been trading at parity with the Spanish piece of eight, which created a small market for seigniorage, or making money off the difference in value between the Precious Metal and the face value. Enterprising traders shipped American Silver dollars to the Caribbean for worn-out Spanish pieces of eight to put back into circulation, pocketing the difference in Silver price. Gresham’s Law that “bad money drives out good” meant that the Silver dollar would not be struck again for over thirty years.

Early dollars can be hard to find, but later mintages are more common. Some early specimens in the Capped Bust series are available for a reasonable price in lower grades. Higher grades can get prohibitively expensive fast. Flowing Hair and Draped Bust examples in higher grades are out of range of all but the most dedicated and well-heeled collectors, and even low-grade examples cost hundreds of dollars. Some Capped Bust overstrikes are extremely hard to find and command a massive premium at auction.

The higher populations of later series like the Liberty Seated make them a much easier prospect for intermediate collectors. Early examples of U.S. coinage including the dollar are not easy to get one’s hands on.