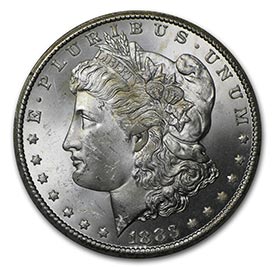 The dollar coin used to be one of the foundational coins of U.S. currency. These were sanctioned originally in the Coinage Act of 1792 and first minted in 1794. Though they were forced out of circulation a couple of times over the course of their run and are no longer commonly used, Silver dollar coins have proved enduringly popular with collectors even after their run in circulation ended. The Morgan Silver dollar ran from 1878 to 1921 and was tied up in the bimetallic monetary controversies of the day.

The dollar was struck for circulation first a few years after its smaller sibling the half dollar and was based on the same planchet. Early half dollars were struck from 89.24% Silver and 10.76% Copper, an alloy that was slightly modified at the time of the Liberty Seated release. The pattern coin Gobrecht dollars that preceded them kept the original composition, but by the time business strikes took place in 1840 the metal composition had been adjusted. The alloy was changed to 90% Silver, a percentage it would retain until the last Peace dollars were struck in 1935. Morgan dollars were struck from this same 90% Silver alloy.

The Liberty Seated had stayed in production till 1873, but their Silver content outweighed their face value by the 1850s and they circulated far less. New coinage laws in 1873 had no provision for the Silver dollar, and production of these dollars for U.S. circulation did not occur until the Bland-Allison Act of 1878. The Trade dollar created for export filled the gap and saw limited circulation until it was barred from legal tender. The Morgan dollar was the direct result of the Bland-Allison Act, which made the Treasury responsible for buying between $2 million and $4 million in Silver for dollar coinage each month. This lasted until 1890, when it was replaced by the Sherman Silver Purchase Act. This act specified that the Treasury should buy 4,500,000 troy ounces of Silver each month. It only required Silver dollar production for another year, though dollar coins were still struck. This act was repealed in 1893. Then in 1898 all bullion purchased while this act was in force was required to be coined into dollars.

The Morgan dollar was not struck from 1904 to 1921. The Pittman act of 1918, designed as a subsidy to the Silver industry, forced the Treasury to collect many of its previously coined Silver dollars, melt them and sell them as bullion. They then purchased Silver from American mines and used it to coin a new year of the Morgan dollar in 1921.

This coin was designed by George T. Morgan, the assistant engraver of the U.S. Mint at the time. Morgan’s design features the face of Liberty prominently on the obverse, and the reverse is an eagle with wings spread similar to the reverse of the Washington quarter.

The Morgan dollar’s history is set against the backdrop of the wars over the monetary system of the United States. “Free Silver” advocates like famous orator William Jennings Bryan believed that a bimetallic system would usher in a new era of prosperity for the nation. Bryan gave one of the most famous political speeches of all time in an effort to stop the advance of the Gold standard with his “Cross of Gold” address. The bimetallic standard established at the beginning of the U.S. had been repealed with the 1873 Coinage Act, and the Gold standard looked all but assured.

Bryan and the Free Silver advocates lost out, however, and though Silver dollars were still struck, the bimetallic system was not in the cards for the U.S. The Gold standard became formal in 1900.

Many Morgan dollars are easy to get one’s hands on for not much over bullion price, especially in lower grades. As a general rule, branch mints are much more valuable than the main mint. There are some very rare and collectible key dates, though, including the 1889CC, the 1893S and the 1901.

Morgan dollars in lower condition and non-key dates can often be bought in bulk for their Silver content.