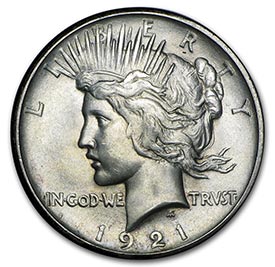 The dollar coin used to be one of the foundational coins of U.S. currency. These were sanctioned originally in the Coinage Act of 1792 and first minted in 1794. Though they were forced out of circulation a couple of times over the course of their run and are no longer commonly used, Silver dollar coins have proved enduringly popular with collectors even after their run in circulation ended. The Peace dollar ran from 1921 to 1935, with a brief break from 1928 to 1934.

The Peace dollar was resurrected for one more year in 1965 (dated 1964), but plans were scrapped and all were melted down.

The Peace dollar was the first time that the numismatist lobby showed major influence in the striking of a new coin. Their idea for a commemoration of the World War I peace was directly traceable to an article in the Numismatist in November 1918, and the idea took hold in the community. The 1920 American Numismatic Association convention brought the idea to the public eye.

Peace dollars are mostly available for only a small premium over Silver price, but there are a few key dates that can be much more expensive, particularly in higher grades. In particular the 1921 and 1922 high relief coins are rare and very hard to get one’s hands on. Many of them are available in bulk in lower grades for their Silver content.