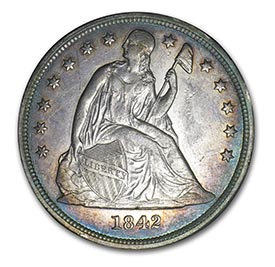 The dollar coin used to be one of the foundational coins of U.S. currency. These were sanctioned originally in the Coinage Act of 1792 and first minted in 1794. Though they were forced out of circulation a couple of times over the course of their run and are no longer commonly used, Silver dollar coins have proved enduringly popular with collectors even after their run in circulation ended. The Liberty Seated variety ran from 1840 to 1873, when the Mint stopped striking traditional dollar coins for U.S. circulation.