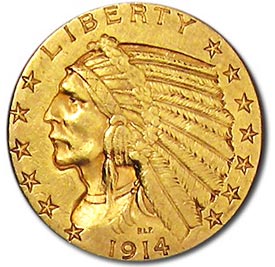 The Indian Head half eagle ran from 1908 to 1929. The design was created by Bela Lyon Pratt, apprentice to the famous Augustus Saint-Gaudens who had previously created the eagle and double eagle designs. This was during the Teddy Roosevelt-era refresh of U.S. coinage, and the quarter and half eagle had unique and beautiful designs that were unprecedented and one of a kind in American coins.

The quarter eagle and half eagle were originally meant to be the same as the double eagle design, but the inscriptions were a challenge to fit on the smaller coins. Saint-Gaudens’s design was made for the larger coins, and as he had died not long after completing his work on eagle and the double eagle, it fell to one of his students to complete it. Bela Lyon Pratt was directed to make a new Gold coin.

The design is unique in American coinage. The Native American man in the headdress on the obverse stood out because few other coins in U.S. history have had Native Americans in the design, with the exception of the Buffalo nickel, the Indian Head cent and the Sacajawea dollar. The reverse of the coin was a perched eagle.

Unlike all other U.S. coins, the surface design was engraved, not raised. This addressed the relief issues that the Saint-Gaudens coins had dealt with, and though Chief Engraver Barber made modifications to the design they were not as sweeping as the changes made to the Saint-Gaudens coins to make them practical for regular use.

This design was not saved and circulated much, and the public thought that the recessed surfaces might collect dust and dirt. Though this series was passed around as gifts by some, the demand was low enough that they stopped being minted in 1916 and only resumed in 1929. Eastern states saw less circulation than Western states, which kept Precious Metal coinage at the center of their commerce well after paper currency became the instrument of choice out East.

Eagles of all types have a high value due to their Gold content, but some have a very high premium as well. Even in low grades, the Indian Head carries a premium higher than one might think because of low mintages and particularly low surviving populations. Many were melted. The 1911D is an extremely rare example of an Indian Head half eagle, as well as the 1909O and the 1929 (the final year of issue).