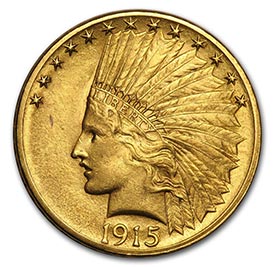 The Indian Head eagle ran from 1907 to 1933. The design was created by Augustus Saint-Gaudens at the personal urging of President Theodore Roosevelt, and though he died in 1907 the legacy of this and his famous double eagle would change U.S. coinage forever. Saint-Gaudens’s design was not easy to strike and took some modification, but when he died the president insisted that they finish the design that month so it could be struck.

Saint-Gaudens only designed the eagle and double eagle, as he died before he could approach the others. The quarter eagle and half eagle were originally meant to be the same as the double eagle design, but the inscriptions were a challenge to fit on the smaller coins. Saint-Gaudens’s design was made for the larger coins, and as he had died not long after completing his work on eagle and the double eagle, it fell to one of his students to complete it. Bela Lyon Pratt was directed to finish the smaller denominations.

The design features Liberty wearing a Native American headdress on the obverse and a standing eagle on the reverse. Saint-Gaudens’s original design was far too high of a relief for the coin press, and even modified designs he provided later were too high, so Chief Engraver Barber and Saint-Gaudens’s assistant Henry Hering went back and forth until they could come up with an acceptable compromise.

There are a few known prototypes of the 1907 as they were dialing the die in. These include the “wire rim” (so named because of the lip at the edge which was not meant to be part of the strike), then the rounded rim which came later. There were some minor design details like periods between words that changed as well.

There was no real need for the coin to be struck during World War I, as demand was low and supply was high as Gold came back from Europe to pay for the war. Striking stopped in 1916, then in 1920 they were made for one year at San Francisco, again in 1926, then 1930, 1932 and 1933. Circulation was low enough that if coins were not struck one year it would not be a huge deal.

Eagles of all types have a high value due to their Gold content, but some have a very high premium. Indian Head eagles are not that rare before 1920 except for 1907 high relief pieces struck at the very beginning, but the 1920S and 1933 are key dates. Branch mints generally cost more.