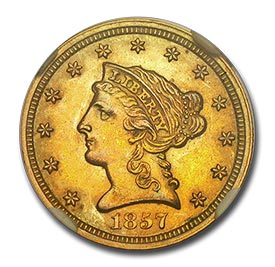 The Liberty Head quarter eagle ran from 1840 to 1907. The Liberty head design was also known as the “Coronet Head”, and it was created by Christian Gobrecht. The design with minor modifications was used for the quarter eagle, half eagle and eagle during their run.

Gold coins were mandated by the Coinage Act of 1792, with the quarter eagle, half eagle and eagle finding their genesis in that act. These coins were struck from 90% Gold and 10% Copper, though some of the Gold used at Dahlonega had a bit of Silver in the alloy that gave them a greenish tinge.

The obverse of the coin is Liberty wearing a coronet. The reverse of the coin is a heraldic eagle. The design was created by well-known coin designer Christian Gobrecht, creator of the Liberty Seated design, the half cent, the large cent and the Gobrecht dollar. Gobrecht was the third Chief Engraver of the U.S. Mint, and he set the tone for much of the coinage that was struck around his time in office.

Gobrecht’s design for the eagles had a fairly long run as U.S. coinage goes. These designs were well-liked and Gold coins saw widespread use. For the most part, these ran unchanged. There were a couple of changes including some slight modifications to the size of some design elements on the reverse. The quarter eagle had no motto, but the half eagle and the eagle ran without a motto in their earlier years and then had a motto added later in their run.

The quarter eagle had one small run of its own with a mark of CAL above the eagle on the reverse.

All eagle variants in this era were made with a Gold content of 90%.

Eagles of all types have a high value due to their Gold content, but some have a very high premium as well. High-grade specimens of the Liberty Head are very expensive indeed. Most of the more expensive variants come from the branch mints, but there are errors and rarities that go for much more. These will often cost hundreds or even thousands of dollars even in low grades.