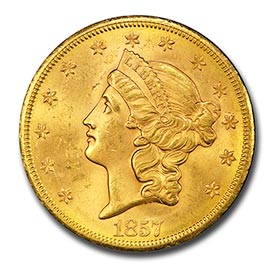 The Liberty Head double eagle ran from 1849 to 1907. The Liberty head design was also known as the “Coronet Head”, and it was created by James B. Longacre.

Gold coins were mandated by the Coinage Act of 1792, with the quarter eagle, half eagle and eagle finding their genesis in that act. These coins were struck from 90% Gold and 10% Copper. The eagle had worked for years, but the double eagle was only authorized after the California Gold Rush. Gold stockpiles grew dramatically and support for a bigger denomination was strong. A bill to create a Gold dollar and double eagle passed Congress in 1849 and the Mint was authorized to create a new coin.

There was some internal conflict at the Philadelphia Mint at the time. James Longacre, the Chief Engraver, was the outsider and dealt with a fair bit of harassment in his quest to create the design. It eventually went through, but the final set of dies was not completed until 1850.

The head is Liberty, set in a classical style with her hair in a bun. She is wearing the coronet which gives this coin its alternate name. The reverse is a variation on the Great Seal of the United States. At the time the design was not received well, but it has retained significant collectability.

The double eagle was one of the biggest mintages of coins at the time. Almost all of the Gold used for coinage was turned into double eagles. California and the West territories and states had a major shortage of Precious Metal coins.

There were minor changes made to the coin over its run, but for the most part this design ran for the whole duration. In 1904 President Roosevelt inquired about changing the design, and the following year his friend Augustus Saint-Gaudens began a new design that went into effect in 1907. This marked the end of the Liberty Head double eagle.

Eagles of all types have a high value due to their Gold content, but some have a very high premium. High-grade specimens of the Liberty Head are very expensive indeed. Most of the more expensive variants come from the branch mints, but there are errors and rarities that go for much more. The 1849 is a pattern coin, and the best we can tell is that the mintage was only one. Some of the late mintages in high grades go for a lot of money. The 1870CC is so rare as to be almost impossible to find, and type sets can be hard to collect. The 1886 is also very expensive and rare.