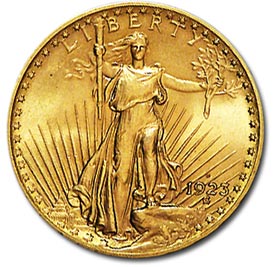 The Saint-Gaudens double eagle is often considered the most beautiful U.S. coin. It was designed by Augustus Saint-Gaudens, a famous sculptor who had previously worked with the Mint but had run into conflicts and had refused coin commissions. Theodore Roosevelt’s friendship with Saint-Gaudens and ascent to the Presidency allowed Roosevelt to persuade him to take another stab at coin design, and the resulting double eagle ran from 1907 to 1933.

Gold coins were mandated by the Coinage Act of 1792, with the quarter eagle, half eagle and eagle finding their genesis in that act. These coins were struck from 90% Gold and 10% Copper. The eagle had worked for years, but the double eagle was only authorized after the California Gold Rush. Gold stockpiles grew dramatically and support for a bigger denomination was strong. A bill to create a Gold dollar and double eagle passed Congress in 1849 and the Mint was authorized to create a new coin.

The Liberty Head had had a long and successful run, but Theodore Roosevelt wanted to modernize U.S. coinage and create works that were outstanding for beauty and design. The high-relief design of the early Saint-Gaudens coins was directly tied to Roosevelt’s wishes and diametrically opposed to the wishes of the mint, particularly Chief Engraver Barber.

Saint-Gaudens had been working on an eagle design for the cent, but he adopted it for the double eagle after learning an eagle could not by law appear on the cent. The obverse of the design is Liberty holding a torch and olive branch walking across a rocky area with the U.S. Capitol and the sun behind her. The reverse is a flying eagle with the sun rising behind it. The motto was placed on the edge of the coin to make way for the other design elements.

The first designs that were sent to the Mint were struck as pattern coins, and even on a special medal press it took up to nine strokes. Circulation strikes had to be doable in one. The few ultra-high relief coins that have survived are incredibly rare and expensive. The design was knocked down to a high relief, then further for successive years of coinage as it proved impractical for regular use. Chief Engraver Barber created his own low-relief version of the design which was used for some 1907 coins and all years succeeding. Barber made minor modifications to the design in addition to lowering the relief.

Double eagles were struck through 1916, then stopped as Gold coins flowed back across the Atlantic due to World War I. They were struck again from 1920 through 1933. Many of the later coins in the series were reclaimed when President Franklin D. Roosevelt reclaimed Gold, and they were often melted. Though mintages were large the 1933 is one of the rarest dates in the series.

Eagles of all types have a high value due to their Gold content, but some have a very high premium. High-grade specimens of the Saint-Gaudens are very expensive indeed. Most of the more expensive variants come from the branch mints, but there are errors and rarities that go for much more. All 1907 varieties are rare and expensive, particularly the ultra-high relief pattern coin. Later dates in the series are also very rare and expensive, particularly the 1933, of which many were melted.