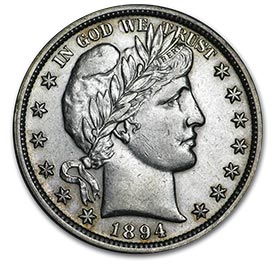 Barber half dollars are among many coins that were designed by U.S. Mint Chief Engraver Charles E. Barber. These coins replaced older designs with a new, clean design that received mixed reception both at the time when it was circulating and today as it is collected.

But these unique coins are a unique product of their time in American history, and a testament to the legacy that Barber left on the world of numismatics. His influence is felt throughout this era of U.S. coinage, and the struggle between his utilitarian vision and the more aesthetic vision of other designers set the stage for some of the most iconic U.S. coin issues of all time.

The Barber coins came about because of a failed contest.

U.S. Mint Director Edward O. Leech took office in 1890 and one of his first acts was to propose a competition for a redesign of U.S. coinage. The competition was open to the public, though there was a short list of artists that were specifically asked to participate.

The contest only offered a reward for the winner, and none of the well-known artists invited were enthusiastic about the idea. They came back with a counterproposal that Leech could not fulfill, and as a result all the designs submitted came from the public and not the handpicked list of artists. Barber, Boston seal engraver Henry Mitchell and famous sculptor Augustus Saint-Gaudens were picked to judge the designs. Not a one was accepted. Later in life, Barber claimed Saint-Gaudens objected to every design. The two men were rivals in coin design, with Barber’s simplistic and workmanlike designs stemming from his craft background, while Saint-Gaudens’s fine art training made him consider aesthetics more than practicality.

With his plan to use the competition winner for a coin redesign failed, Leech asked Barber to prepare new designs for the Silver coinage currently in circulation (with the exception of the dollar, as the Morgan dollar was still being struck in large quantities).

The decision to create the next set of designs in house caused some controversy, as some who were involved with coin design were frustrated that a man who was not a fine artist was being given the responsibility for the design. The design took time to approve, with Leech and Barber going back and forth about the finer details. There are some early pattern coins available for 1891 with some of these rejected design elements.

The obverse of the coin was the head of Liberty with a crown of olive leaves, and the reverse was a heraldic eagle on the larger coin sizes. For the time, a slight variant of the old reverse was used. The first coins of the new Barber design were struck in 1892, and the design (with slight modifications) ran through 1916.

Barbers were the first major redesigns for any American coinage in some time, and they marked a new era for U.S. coins after the English-inspired engravings that William Gobrecht had done for the previous Seated Liberty series.

The problem that people ran into when they were trying to redesign coins in Barber’s day was that the U.S. Mint did not have the legal grounds to do so. This was changed by act of Congress and signed into law by President Benjamin Harrison, creating the ability for the Mint to refresh the coin designs periodically with permission from the Secretary of the Treasury.

These coins are not considered among the most beautiful of American coins, but they are an important period in U.S. Mint history and coinage history as a whole.

The Barber half dollar design was revised slightly through the life of the coin as Barber made practical adjustments. As a result, there are many clear features from year to year that can show when a Barber quarter was made. High mintages mean that these coins are fairly common and inexpensive in lower grades, though high grades are worth more.

Like other Barber coins, the San Francisco and New Orleans mint mark is worth more due to the lower mintages and surviving populations. The 1892-O micro O variation is one that will fetch a high premium, particularly if in uncirculated condition.