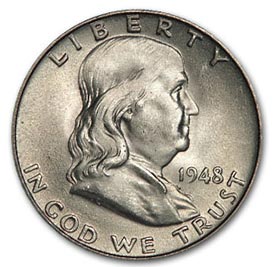 The half dollar has been struck with few interruptions from the beginning of U.S. coinage to the present day. These were sanctioned originally in the Coinage Act of 1792, and the half dollar has been one of the foundational coins of the U.S. monetary system till it fell out of favor in the late 20th century. Half dollars were first minted in 1794. The Franklin half dollar was struck from 1948 to 1963, when it was phased out in favor of the Kennedy half dollar mere months after his assassination.

The Franklin half dollar was the brainchild of Mint director Nellie Tayloe Ross, who signed off on it because of her love of Benjamin Franklin. Ross wanted to get Franklin onto a coin, and with the half dollar she had her chance.

John R. Sinnock was the chief engraver of the mint at the time. Ross mandated that he start to work on new designs for the half dollar in 1947, and he did. But Sinnock died on May 14, 1947, and his designs were not complete. Gilroy Roberts took his place and finished the design, but Sinnock’s initials still went on the design when it was finished. Sinnock designed the Roosevelt dime as well.

The Franklin obverse was based on Sinnock’s earlier work creating a medal with Franklin’s face. The reverse was based on a sketch by John Frederick Lewis. It showed the Liberty Bell, crack and all. There was some opposition to showing the crack on the bell, but in the end the reverse went ahead as created.

Franklin halves were composed of 90% Silver and not affected by the 1964 change in Silver coinage, as they stopped being struck before the change. Franklins were not struck in huge numbers until 1962, when demand increased as coins began to be hoarded. Franklin half dollars decreased in quality in the late 1950s due to the master die wearing down.

There was some controversy about Sinnock’s initials on the coin, as this was during the Cold War while Joseph Stalin was in power in the U.S.S.R. Some thought Sinnock’s initials were those of Stalin, but the Mint resisted change. The Franklin ran with only minor changes until the Kennedy half dollar was pushed through quickly after John F. Kennedy’s assassination.

The Franklin half dollar series was the last U.S. circulating half dollar to be made of 90% Silver for its entire run. After the 1964 Kennedy half dollar, Silver coins were not struck for circulation in 90% Silver. The half dollar was debased to 40%, and other Silver coins such as dimes and quarters were changed to cupro-nickel.

Franklin halves are common, particularly in the later dates which were often hoarded. There are a few dates with higher grades or errors that are harder to find, including the 1949-D. There are only a few dates and a few varieties in this series, making it easier to collect than some other U.S. issues.